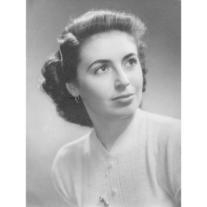 Moreen Le Fleming Ehly died peacefully in the early morning hours of December 26, 2012 at her home in Lake Forest, CA. She was 83. Moreen was born March 16, 1929 in Heliopolis, Egypt, the third daughter of Edward Ralph and Irene Louise Le Fleming. Though she spent her earliest years growing up in London, the majority of her childhood and years leading up to her early twenties were spent in the cities of Cairo and Heliopolis, Egypt. She attended several schools, including Miss Woodley’s School in Heliopolis, the English Schools in Bulack, Heliopolis, and Cairo, and St.Clare’s College in Heliopolis.

In her late teens, Moreen competed in track and field as an amateur athlete representing sporting clubs in Cairo and Heliopolis. She medaled in many events, particularly the 100m and 200m sprints. She taught kindergarten classes to many adoring pupils at Victoria College, a British-style public school whose students were predominantly the children of royalty, diplomats, magnates, politicians, and landowners throughout the entire Middle East. Moreen also worked for a short time at the British Middle East Office (BMEO) in Cairo, which made her privy to many of the behind the scenes political changes occurring within Egypt and in other areas throughout the Middle East at that time.

Moreen was a noted beauty,who won the title of Miss Egypt of 1949 at the event held at the Auberge des Pyramides nightclub. King Farouk, a frequent guest at the nightclub, was among those in attendance.

It was no surprise that during her visits to the sporting clubs in Cairo that Moreen caught the eye of her future husband, Robert, a United States Marine stationed in Cairo as an embassy guard. Much of their courtship was spent touring Egypt, with my mother riding sidesaddle on the back of my father’s Harley Davidson motorcycle.

In January 1952, Moreen and her mother fled Egypt during the Black Saturday riots in Cairo and settled in London, where Moreen took a position at the Fleming’s Hotel on Half Moon St. It was a difficult adjustment for Moreen and her mother at a time marked by the stringent postwar food rationing and the legendary London fog of 1952.

On leave, Robert reunited with Moreen in London and they married on December 21, 1952. Getting Moreen legally into the United States would prove difficult, and it was only through the efforts of Ralph Edwards, the host of the Truth or Consequences show that cut through the red tape. Fellow Marines in Robert’s company had contacted Edwards, who came up with a plan to have Robert appear as a contestant on the show to judge a beauty contest. On stage, models and starlets were to pop out of oversized advertisement product containers. Moreen popped out of a huge Pet Milk can, much to Robert’s surprise and joy.

Moreen began life as the wife of a United States Marine, and during her husband’s tours of duty in the United States and Japan, she made homes in Los Angeles and San Clemente, California. With the birth of her two sons, Vincent and Kurtis, Moreen and Robert lived in the Algiers community of New Orleans, Louisiana. Moreen often shared the fond memories of the short time the family lived in New Orleans, including the Mardi Gras parades and the excellent coffee. However, she also recalled with anger the discrimination she witnessed. She related many disturbing incidents, particularly the segregated Christmas party at the Sears store where she worked part-time, and the treatment of people on the buses. The fact that sons Vincent and Kurtis preferred to ride at the back of the bus seemed to confound everyone, yet no one dared confront Moreen about it. During the final years of Robert’s enlistment, the family settled in Santa Ana, California, where Moreen did what few women did at that time without their husbands’ approval- she purchased a home. Robert’s return to civilian life also marked the birth of their daughter, Juliet.

In the late 60’s, Moreen returned to the workplace and took a position at Sears and Robeck Co. at South Coast Plaza in the catalog sales department. She steadily moved up in various departments and broke through numerous glass ceilings, becoming one of the first women commission salespersons in the major appliances department. Hard working, intelligent, and ever a lady, she eventually earned the respect and friendship of her predominantly male counterparts in that extremely competitive field.

At this time, Moreen and Robert eventually moved to the Woods in Lake Forest, California. She loved the eucalyptus forest that surrounded her home. Moreen and Robert also enjoyed many days with her children and grandchildren poolside at the Sun and Sail Club.

Moreen continued to stay physically active and encouraged her family to participate in sports and travel. Moreen and Robert loved to take their children to Corona Del Mar Beach, where all the children learned to bodysurf. Moreen often took members of her family to the local high school track to run laps or went on long evening walks around the lake in Lake Forest. When the children were younger, Moreen and Robert took the whole family on wonderful road trips through California, Nevada and Arizona. Later, she was able to afford trips abroad to visit family in England and Egypt.

After many years as a top salesperson at Sears, Moreen retired on disability due to a workplace injury and pursued a second career as a writer. She signed up and attended writing classes through her local community college, and joined private writers’ workshops. Initially, she aimed at writing romance novels. However, she soon changed her focus entirely, choosing instead to write horror novels in the vein of Stephen King and Dean Koontz. No doubt this focus was also influenced by the books she had read in her father’s library. One book in particular was the 1887 classic horror novel, She, which told the story of a beautiful sorceress versed in the secrets of everlasting life, who ruled an African tribe in a subterranean land laced with horrible terrors.

Moreen dove into her writing, incorporating into her novels the many influences of her life in Egypt, including her vast knowledge of the times of the ancient pharaohs, and of modern day Middle Eastern life and customs, including the fear of the evil eye. Trips to New York to visit her adult son Vincent became research projects as she scouted for settings in her novels. She visited such sites as the obelisk in Central Park, which featured prominently in her first published novel, Obelisk. In all, Moreen had four horror novels published by Leisure Books: Obelisk, Totem, Evil Eye and StarPrey. Deemed classic 80’s Pulp Horror by growing followers of the genre, each novel featured wildly graphic cover art, with her first two books featuring die-cut covers that opened to reveal half-skulls with crazed eyes.

Though Moreen pursued her passion for writing novels, she managed to devote most of her time to her family, particularly her seven grandchildren. “Gramma” helped to raise and support all of her grandchildren, providing them with fond memories of the special times they shared: daily trips to the Sun and Sail club, feeding ducks and geese at the local duck pond, day trips to the beach, freshly baked cookies out of the oven, shopping trips to the local mall, buying truffles at See’s candies, and trips to museums in Los Angeles.

One of the most memorable traditions was of the annual family gatherings at Easter, Thanksgiving and Christmas. Setting the table with her best Spode china and crystal, Gramma served delicious, home-baked meals that are remembered to this day.

Gramma always encouraged her children’s and grandchildren’s interests and development of other talents, attending school functions and graduations, including her grandson Ehren’s graduation from Marine Corp boot camp.

Our family will always remember her intelligence, her strength, her devotion to her family and her ability to bring all of us together to enjoy special occasions. She will be greatly missed by all.

O’Connor Mortuary is handling arrangements to include:

Reception following the service will be held at the home of Paul and Juliet Vanderlinden,
22265 Parkwood St., Lake Forest, CA 92630.

Donations in the memory of Moreen Le Fleming Ehly may be made to:
Muscular Dystrophy Association-WEB
P.O. Box 78960
Phoenix, AZ 85062-8960