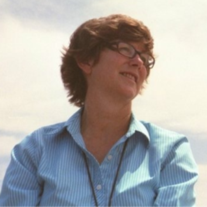 Miriam Allen Keilar, 61, of Mission Viejo, California, passed away on Tuesday, May 17, 2016, at Saddleback Valley Hospital with her husband by her side.

Miriam was the rock of her family and she will forever be remembered for her wit, caring, creativity, intuition and moxie.

She was devoted to her husband, Glenn, and was looking forward to her upcoming retirement with him, a chance to see more of their cherished Los Angeles Angels and to travel. They had planned a cruise to Alaska and a trip to Italy – so Miriam could finally see the Uffizi Gallery, which was closed for renovation when they visited Florence on their honeymoon 41 years ago.

Over the years Miriam captained countless ‘Thelma and Louise road trips’ with her daughters – and then her grandsons – most recently to the Grand Canyon and an 11-state swing through the northeast. Her daughters would rib her for stopping at every wide spot in the road.

Miriam was a constant presence in the lives of her kids and grandkids. She would leave autocorrected words in her texts for a laugh and write them hilarious letters from the point of view of the family pets.

She was an elementary school teacher for more than 28 years, known by colleagues for spending extra hours and seeking out additional resources for students in need. When a child needed reading glasses and his or her family could not afford them, Miriam would buy them.

Her life was a grand adventure, spanning the country and the globe.

Miriam was born on June 10, 1954 in Vernal, Utah, the younger of two children. She was raised in the tiny oil lease community of Redwash until she was six. Her family moved to Vernal and then Southern California. Miriam attended Carpinteria High School. She met her future husband, Glenn, an American Field Service exchange student from Australia, her junior year. Miriam was hard to miss; she was very involved in school activities and Glenn was struck by her natural beauty. Fittingly, they were lab partners in chemistry class.

Miriam attended the University of California at Santa Barbara as Glenn returned to Australia. The separation did not suit them. They became engaged, marrying and living in England while Glenn attended advanced naval training for the Royal Australian Navy. They moved to Australia, where Miriam completed her Bachelor’s Degree in Art History by correspondence. Following Glenn’s naval postings, the couple lived in Sydney, where their daughter Kelly was born and Canberra, where their daughter Brianna was born.

In 1982, she and Glenn returned to Southern California to raise their kids. Miriam earned her teaching credential at the University of California at Irvine and taught in Saddleback Valley Unified School District.

Miriam is survived by her husband, Glenn Keilar; her daughter Kelly Keilar of El Dorado Hills, CA; her daughter Brianna Keilar of Washington, D.C., her grandchildren Andrew and Lucas; her father Glen (Rose) Allen, of Vernal, UT; and her brother Robert (Marianne) Allen, of Ventura, CA. Miriam is preceded in death by her beloved mother, Melva Allen.

A Celebration of Life will be held on Saturday, June 11 1-4pm in Mission Viejo, CA. Please contact the Keilar family on Facebook for location information. Dress with cheer.