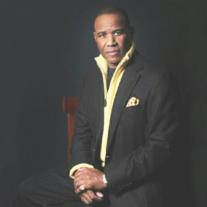 Michael Anthony Johnson, Sr. departed this life on the evening of Monday, April 20, 2015 in the comfort of loved ones. Michael was born in Washington, D.C. on July 12, 1951. He was the fifth of ten children and twin to Michelle Antoinette. Michael’s father, LeRoy Johnson, Sr. and Mother, Trellis C. Johnson, along with eldest brother, LeRoy Johnson, Jr. preceded him in death.

Michael attended school in Washington, D.C., graduating from Calvin Coolidge High School in 1970. He furthered his education by attending California State University, Long Beach obtaining a MS in Health Care Administration and a BS in Business Management from the University of Phoenix. Michael spent over 19 years in the health care and hospitality management profession, culminating his career at Vintage Senior Living.

Being positive and optimistic were Michael’s greatest strengths. He took the most joy in being around his family, friends, and colleagues. Michael was the life of the party. He loved dancing, singing, listening to music, and enjoying life. Michael also enjoyed traveling for pleasure. He was compassionate, kind, and genuine. Michael had a very giving heart and shared it with so many, always willing to give a helping hand to anyone in need. He was a joyous person who relished life to the fullest. Caring, compassionate, nurturing, obliging, and thoughtful are but a few words worthy of describing Michael.

Michael was affectionately called “Frog” by his childhood friends due to his deep voice. His siblings call him Brother, his wife lovingly called him Baby, his children referred to him as Dad, and his grandchildren affectionately called him Granddad. Michael was a loving son, supportive brother, devoted husband, a caring father, and a doting grandfather. As well as, a kind uncle, a valued brother in-law, a dependable friend, a great neighbor, and a genuine person.

Michael was blessed with many talents. We would be remiss if we did not mention Michael’s impeccable fashion sense. He loved shopping, making a great first impression, and leaving lasting memories.

In memory of Michael Anthony Johnson, Sr. please make donations to the National Pancreatic Cancer Foundation: http://www.firstgiving.com/fundraiser/michaeljohnson712/michaeljohnson. Michael’s family has set a goal of raising $10,000 in support of pancreatic cancer research. Help us find a cure.

7 responses to Michael A. Johnson