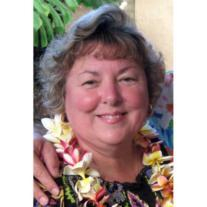 Maureen Joyce Spinat (Courtemanche), 65, of Yorba Linda California passed away suddenly on December 7, 2012 of cardiac arrest after a long battle with diabetes.

Generous and loving wife, mother, grandmother, and friend she was born in Nashua, New Hampshire on August 17, 1947. Maureen was one of seven children. She relocated to California in 1967, eventually settling in Orange County where she met and married her best friend and life love Mark Spinat. This past summer they celebrated 34 years of marriage.

During her life she enjoyed family camping, as well as extended trips to New Hampshire to visit her mother and siblings and many nieces and nephews. The past five years she was able to visit Hawaii where many treasured memories were created with her husband and her children and grandchildren.

Maureen was an accomplished homemaker and doting mother and grandmother, creating a warm, beautiful place for family and friends to gather and enjoy her delicious cooking and much laughter.

Maureen was predeceased by her father Maurice Courtemanche and survived by her mother Rita Martin, loving husband Mark Spinat, her children Mark Turgeon and Michelle McFarlane. She also has four grandchildren, Aaron, Andrew, Zoe, and Riley. She is also survived by all her siblings, Donald, Daniel, Darryl and Douglas Courtemanche of Nashua and Dennis Courtemanche and Linda (Courtemanche) Mahoney of Florida and many relatives here and in New Hampshire.

A funeral service honoring her life will be held at O’Connor’s Mortuary in Laguna Hills, CA on December 16, 2012 at 10:00am followed by a graveside service at El Toro Memorial Park in Lake Forest, CA.