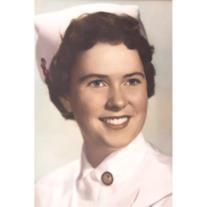 Mary Theresa O’Keefe was born Mary Theresa Petri to her parents Mary and John Michael Petri in Tacoma, WA on May 4, 1935. She was the oldest of four girls and shared a happy and wonderful childhood with her sisters Elizabeth ‘Betty’ Hedreen, Joan Imhof, and Bernadette ‘Bernie’ Piscatella. Mary and her three sisters were delightful young girls whose parents adored them. The four girls had a mischievous side with Mary in charge of baby buggy races down the cobblestone streets of their neighborhood, with baby sister Bernie in the baby buggy. Their father owned a service station and the Petri sisters conspired together to secretly place nails down in the surrounding streets. They then put homemade fliers on neighborhood car windows advertising their father’s business, in case someone needed new tires!

Mary attended St. Patrick’s Elementary School and Aquinas High School in Tacoma, WA. She graduated from Seattle University and was crowned homecoming queen her Senior year. She graduated with her BA in nursing and began her first job as a nurse traveling on trains between Chicago and Seattle. She first met Timothy Francis O’Keefe while at Seattle University, but their relationship really blossomed while acting as his RN as he recovered from a broken ankle. Tim remembers Mary as being the most popular girl at the University and said, ‘Mary knew everyone and all the boys wanted to date her’. Tim left for Germany to serve as First Lieutenant in the United States Army. On one of his trips back to the States, he sent Mary a telegram asking her to meet him in Chicago on one of her train stops. He waited several hours for her train to come in, but it seemingly was late and he wasn’t sure it would ever arrive. He was about to give up hope and got up to leave when suddenly he heard his name being paged by Mary who had finally arrived. After this ‘magical’ meeting they decided to marry on July 18, 1959 in St. Patrick’s Church in Tacoma, WA. After they married they moved to Tim’s childhood neighborhood in Westwood, California to begin their family. Eventually they moved to Glendale, California to raise their 6 beautiful children on North Maryland Avenue for 35 years.

Mary treasured her family and most importantly, her husband Tim. Tim adored her and always celebrated her beauty, her creativity, her role as a mother, friend, and wife. They recently celebrated 56 years of a beautiful marriage together. They were blessed with 6 children, their 6 incredible spouses, and 14 beloved grandchildren. Mary’s grandchildren were deeply loved by their grandma. She cherished and celebrated each one of them and they absolutely adored their grandma. Her love, quiet grace, unwavering faith in God, and creativity were an inspiration to all of them. Mary was a wonderful confidant, devoted friend to all, and always spoke positively and lovingly about everyone she knew. Enthusiastically she hosted hundreds of parties in her lifetime which included birthday parties for her children, celebratory luncheons and showers for her friends, themed events for their wonderful Valley and Incarnation Church friends, as well as last minute dinners for friends and family.

Mary had many passions that involved hands on experiences in multiple charities and organizations including PEO, National Charity League, Assistance League and Book Clubs. Throughout the years when her children were young she encouraged them to partake in philanthropic activities by taking them to convalescent homes and homes for disadvantaged children. At one point Mary could be seen painting cheerful murals on the walls of these homes in order to brighten up the sterile environment. Yearly she encouraged her six children to sing and dance for the residents of these homes, and somehow she motivated their friends to come along as well. Her legacy of helping and loving others was passed down to her children and grandchildren as all of them have their hands in charitable and humanitarian organizations. Mary especially embraced a second family in Honduras and they all cherished and loved her as well. She loved traveling and visiting her children wherever they might be, including multiple trips to third world countries.

One of Mary’s unique qualities, which she was revered and admired for, was her creativity. Her gardens flourished, her flower arranging was spectacular, her paintings were perfect, and she had a zestful enthusiasm for interior design. Her elegance and class regularly showed up as she prepared amazing dinners with gorgeously decorated tables that always included fresh flowers and candles on the table every night, often with more than 8 at the dinner table! She started the Mary O’Keefe Boutique in 1975 and hosted it for over 15 years while bringing together creative artists from all genres. People lined up around the corner the day of the boutiques in order to get in the door to purchase her creative wares. Every boutique brought the ability to help pay for her children’s braces, piano lessons, gymnastics classes or redecorating another room in their home. An unexpected hobby that Mary became fascinated with in the last ten years was painting on canvas. Over the years each of her children have been gifted with some of her beautiful works of art and Tim proudly shows off some of her framed pieces in their home.

Mary was sunshine, love and a beacon of light. She brightened a room with her grace, she loved unconditionally, and she cherished Tim, her children, their spouses, her beautiful grandchildren, her large extended family, and her bounty of beautiful friends. Remember Mary with love when you see a garden full of flowers or the waves crashing at the beach on a sunny day, for these were two of her favorite things.