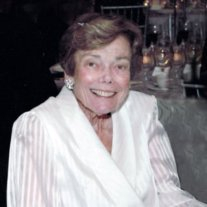 Mary Lou Moorhead was born on August 4,1926 in Kansas City, Mo. to William and Mary Kramer and passed peacefully in her sleep at her home in Corona del Mar on August 3, 2013.

She married Jay Moorhead, M.D. in 1949 and moved to California, landing in Long Beach in 1952, where she was active in civic volunteer work, culminating with her presidency of the Junior League of Long Beach. She is survived by sisters Joan Boucher and Virginia Bloomquist, sister-in law BJ, her four devoted children, Gary, Mike, Steve & Gail (Slaughter), her beloved grandchildren Jay, Molly, Mike, Ted, Scott, Kate, Kelly, Michael, Jazz & Shanti, great-grandchildren Lou and Lyla Leigh and a convention-room full of in-laws, best friends and wonderful caregivers. While in Long Beach, Jay and Mary Lou became active members of Virginia Country Club, where many of their close friends were also members. Mary Lou loved to play golf with her family and friends until it became too physically taxing. She devoted the last 20 years of her life to her family and friends and had a very special bond with St. Teresa.

The family requests that in lieu of flowers any donations be made (quickly, for her children’s sake) to the Alzheimers Association of Orange County (www.alz.org/oc). A Mass celebrating her eternal life will be held at Queen of Angels Catholic Church on August 12, 2012 at 8:30 a.m.