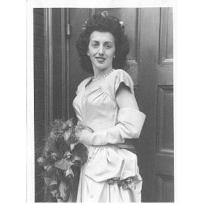 She is a 1941 graduate of St. Gregory’s High School in Chicago, where she performed in school plays and was a guard on the high school basketball team. Her senior photo described her in this way: ‘A mirthquake of laughter. Raven tresses hiding elusive shades of darkest blue.’

Mary has resided in Mission Viejo since 1979. She has been an active member of St. Kilian’s Catholic Church and its Good Samaritan Program. She also was a daily mass attendee and led rosaries on Fridays. An active golfer, Mary accomplished something that few golfers can claim: two holes in one in her lifetime, one of which occurred within weeks of her husband’s death at the same hole where he had his own hole in one. She also played in several bridge clubs.

A gracious entertainer and cook, Mary was known for her hand-cut noodles, her rum cakes baked for anyone who showed her a kindness and for her therapeutic chicken soups, delivered to any ill friends or family. She was also known as a loyal, 30-year fan of the Los Angeles Lakers and for her tendency to speak of Magic, Shaq and Kobe as if they were her own sons. Her family has speculated that her cheers and armchair coaching contributed to the Lakers’ 2009 Championship win, an event that she was thrilled to witness in the last year of her life.

Mary lived on a magical street called Cordero Lane, where neighbors were one, big extended family. Thirty years worth of the Lane’s residents called her a dear friend and some adopted her as a surrogate mother and grandmother when relatives were not near. Friends of her grandchildren remarked ‘She’s the kind of Grandma we all wish we had.’

Her warm smile and green, twinkled eyes brought joy to the faces of her family and her loving caregivers at Silverado until the moment of her death. Mary and her family were especially grateful to her lead caregiver Joana Yamoah, whose tender care, hugs and kisses were a great source of comfort to her and the entire family.

The Riley Family wishes to extend its deepest appreciation to friends, family, neighbors and colleagues who have shown such immense love and support during this difficult time.