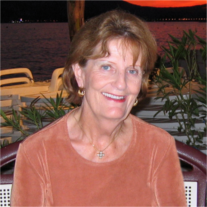 She was born April 30, 1937, the daughter of George W. and Marie Lynch McVey in the Murray Hospital in Butte, MT, only three days apart from the birth in the same hospital of Martin S. Favero who would one day become her husband.

They met and became sweethearts in high school and were married on August 6, 1960, after she had studied two years at St. Catherine University in St. Paul, MN, and graduated with a B.A. degree in education from the University of Montana Western in Dillon, MT.

Their marriage took them on a 57-year journey, with homes in Pullman, WA, where her husband completed his Ph.D. in microbiology; Phoenix, where the couple raised their four children; Atlanta, GA, where she resumed her teaching career, and San Clemente, where the couple eventually retired.

She was known for her beauty and style and admired for her dedication and love for her husband, family and friends, her unshakeable faith and generosity to all who were blessed to have been part of her life. She had a special place in her heart for the women of Isaiah House of Orange County where the poor, homeless and forsaken are always welcome.

She was a daily communicant, communion minister and lector at Our Lady of Fatima Church, where the Memorial Mass will be celebrated at noon, Saturday (Sept. 2, 2017), followed a committal service at Ascension Cemetery and a 3 p.m. reception in the church hall.