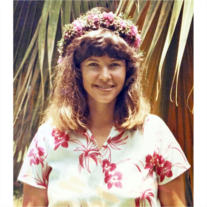 Mary Ann Boucher, resident of Laguna Hills, CA, age 69, passed away peacefully in her sleep on December 6, 2017 after battling Lymphoma Two days prior, she had told her husband of 46 years while sitting together at the kitchen table that Jesus told her “she had a new home in heaven with lots of flowers.”

Mary was born on April 11, 1948 in Tampa, Florida to Top Master Sergeant USAF Oliver Lee Mitchell – a survivor of the Pearl Harbor attack on Dec. 7, 1941 – and Doris Jean Mitchell. Both of Waldren, Arkansas (from different Mitchell families). Mary was the second of 6 brother and sisters and is survived by her younger brother, Kenneth of Denver, CO and younger sisters, Debbie and Kathy and her mother, Doris Jean of Mesa, AZ. Mary has joined her older brother Richard and younger brother, Ron, and her father, Oliver Lee Mitchell in Heaven.

Mary grew up in Aurora, Colorado where her father was a teacher of electronics for the USAF. Mary graduated from Aurora Central High School with Honors and received a scholarship to Colorado State College in Greely, Colorado. At Aurora Central High School, Mary was a member of the Student Council and was on the Board and a member of the Trojanettes and Peppettes Drill Teams. Outside of school, she was a Job’s Daughter Princess, and Queen her senior year.

At Colorado State College (Now University of Northern Colorado), she was named on the Dean of Women Honors List. While there, she was a part of the Fencing team and completed her student teaching in Elementary Education at the United States Air Force Academy in Colorado Springs, Colorado. She graduated from college in March 1970 with a degree in Elementary Education. In the local newspaper, she indicated she wanted to teach in California.

While finishing her degree in Colorado Springs, she took up parachute jumping and skydiving at the Colorado Spring Parachute Center located at Meadow Lake Airport, east of Colorado Springs. She completed 26 jumps while being trained by the instructor from the Air Force Academy.

During 1970-1971, she taught her first elementary classes in Grants, New Mexico at Mesa View School where she taught the 3rd grade. (Note: She hadn’t reached her goal of teaching in California…yet.)

She did finally reach California but this happened through mysterious circumstances. Her future husband, Dennis S. Boucher, was a graduate of USC with a Bachelors and Masters degree in Art Education. He had been a “born-again” Christian since high school where he met Christ at a Young Life camp and the Malibu Club in British Columbia, Canada, sponsored by Young Life based in Colorado Springs. Dennis had not found a wife by 1971 and had attended a class at church called “Right Man, Right Woman” where you were to pray for God’s choice for your wife and the Lord would bring her “to your door.” At the end of 1971, Dennis’ former roommate at USC had become a Christian. He was in the U.S. Army and was being trained in the Vietnamese Language in the Midwest before his deployment to the Vietnam War.

On the way back to California, his roommate’s car broke down in front of where Mary was living in Grants, New Mexico. She helped him fix his car and he shared his new Christian faith with her. Bob, Dennis’ roommate, called Dennis in Pasadena, CA where he was just finishing student teaching in El Monte, CA. He told Dennis about Mary and told him to “take care of her” and he have her Dennis’ address. Mary came to Dennis’ door!! They dated while attending a summer Bible Institute held by Hal Lindsey. Her roomate at the “Jesus Christ Light & Power House” at UCLA in Westwood, CA told Mary about a job opening for Dennis as an art teacher at Tustin High School where she had been Valedictorian. Dennis went for an interview and was hired immediately and spent the next 42 years in the Tustin School District.

Dennis and Mary were married and baptized by Pastor Chuck Smith of Calvary Chapel of Costa Mesa, CA on November 27, 1971. Ken Gullickson, who started the Vineyard Churches, played his new song “The Wedding Song” at their wedding for the first time.

Mary and Dennis were members of Eagle’s Nest Christian Fellowship for 24 years where Mary was a member of the Dance Team. She traveled to Dallas, TX and to Hawaii with this group. She also served in church at South Coast Fellowship and at Celebration Centre Church in Irvine, CA. Later, she became a member of Saddleback Church in Lake Forest, CA in 2014.

Dennis and Mary enjoyed taking cruises on cruise ships after Dennis father took them to the Mexican Riviera on the Cunard Princess in 1983. Their favorite trip was in 2007 where they traveled with Christian musics’ Dove Award-winning group, MercyMe on a John Tesh sponsored voyage on the Carnival Pride. Mary danced before the Lord to mercy Me’s music on this voyage. She loved this group and saw them again in person in 2017.

Mary became an avid sports fan watching USC Football and the Los Angeles Lakers.
She faithfully supported her two sons who at Irvine High School played football on a team that won the CIF Division 2 Championship in 1991. Her son, Michael was MVP on the JV Track team and her son, David won Coach’s Award and Most Inspirational Athlete Award his senior year. In July 1993, Dennis, Mary and their son, David were extras in the movie Sister Act 2.

Dennis and Mary’s daughter, Kristi brought so much love and laughter to the home. Her exuberant personality brought Mary so much joy…she saw herself in her. She loved her daughter and was very proud of her.

Mary loved her grandchildren dearly and loved spending quality time with them. Her two grandsons, Tyler and Luke, both share a love of baseball and played at the high school and Little League levels. She was their biggest cheerleader and loved to come and watch them play. Her son, Michael and daughter-in-law, Danielle, both serve and mentor today’s youth at the San Juan Capistrano Little League. She also loved her weekly visits with her granddaughter, Ashley and the times they shared together.

Mary was a wonderful wife and mother who loved her family dearly. She has now gone before them to prepare a place for them in the Eternal Kingdom of Christ. We will miss her but will someday rejoin her at her “new home with lots of flowers” in Heaven. She is still fulfilling her purpose in Eternal Life!!

“No eye has seen, no ear has heard, and no mind has imagined what God has prepared for those who love Him.” ~1 Corinthians 2:9