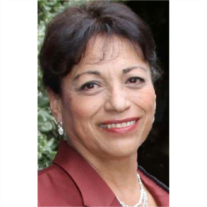 Martha Estrada was born on May 29, 1944 in Tapachula, Mexico, in the state of Chiapas. She was the third of eight children born to Martha and Gabriel Estrada. Her first sibling, Hector, died in infancy. Gabriel, Robert, Nellie, Angel, Tony and Helen are the loving siblings of her nuclear family.

In 1969, Martha and James Mullaney met and married in April of 1971. They were blessed with four children. Michael was born in 1975. Lisa came along in 1977. Michelle was born in 1980 and Lori was born in 1983. These children were indescribable sources of happiness and pride for Martha and James. They have two grandchildren, Tristan and Alexandra (children of Lisa and her husband, Martin Kelly). Lisa announced Christmas morning that there is another baby on the way.

Martha was an incredibly nurturing, loving wife, mother, grandmother, daughter and sister. She really cared about her students while she was a school teacher. She loved life and was an inspiration to all those who knew her. She will be remembered as a prime example of how to live your life. Love, support and protect those in your life. She will be sorely missed.