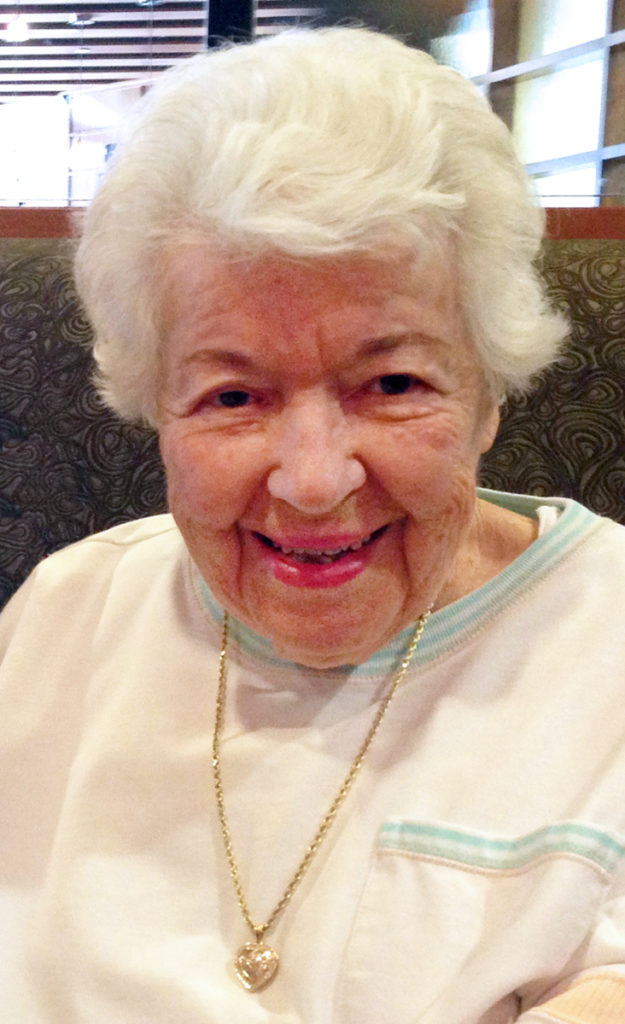 Marjorie Elizabeth Heyer Pike was born on January 18, 1925 in Los Angeles, California, to Bertha Neukom Heyer and Walter Heyer. Her parents had immigrated from Switzerland, and had worked in various odd jobs until Walter became a baker for the Pig and Whistle restaurants. Ultimately, the two established a snug little home on 73rd Street in South Central Los Angeles.

Mom was followed by a stillborn brother, which made her place in the Heyer family all the more precious. She was to remain an only child. By all accounts, she was loved dearly, and never gave her folks a moment of rebellion or worry. She maintained perfect attendance throughout all her school days” from Kindergarten through high school graduation. That gives an inkling of her quiet yet determined approach toward achievement.

She took great pleasure in playing violin for a youth orchestra, thus leading to a lifelong appreciation for classical music.

Bright, and skilled in school though Marjorie was, there was no real push from home or society toward college, so she took her stenography, shorthand and typing skills, and got hired at Los Angeles City Hall in the Fire and Police pension department. While there, in her 20s,  she decided to embark on an extraordinary adventure. Though air travel for civilians was somewhat new at that time, Margie and friend Frieda took off for Europe on a leisurely 10-week sojourn in 1945 to visit an assortment of nations from, naturally, Switzerland to France to Italy. Her photo album with its meticulously labelled pictures shows images of a slender young woman with fluffy side-parted brown hair who wore a skirt and boots into the alps as she strolled along with the support of her hiking stick, and pet the Kuhe, or cows, on her Wanderung down the alpen paths.

In 1953, at age 29, Mom met a dashing, slender man man named Alvin who had a thick and of dark hair, pale blue eyes, and a rakish cleft in his chin. He walked up to her one fateful evening in the basement of the Congregational Church on Wilshire Boulevard in Los Angeles, and said ” May I have this dance?” And dance they did. He was smitten by her charming size 4 1/2 feet, and bedazzled by her dancing prowess. When he found they could both speak auf Deutsch, thanks to his time based in Germany during the Korean war, the romance was signed, sealed and delivered. That great love story lasted 65 years.

The young couple built a life in Los Angeles and then Alhambra and San Gabriel. Al  worked as a civil engineer, and Margie stayed home and raised her two marvelous children, and miniature Schnauzer named Schatzi, which means “sweetheart”, until the children got to junior high age. Then she worked as a secretary in two Kaiser Permanente locations.

When Al transferred to Fluor Engineering Corporation, the Pike family made the big move to Irvine, where they lived in the same house for 42 years. Still filled with Wanderlust, Margie travelled, with her husband or her mother, to Canada, Mexico, New Zealand, Hawaii and other states, and back to der Schweiz once again.

When her mother suffered a disabling stroke, Margie was there to take her into the family home and, with Al’s help, including his succulent cooking, care for Bertha in a tender, constant way for some 8 years. She never complained. She just did what a daughter was compelled to do.

Marjorie was extremely devoted to her family” she worked very hard in her job and in her home to maintain a place of comfort and order. Even illness never caused her to be mean or short-tempered. She continued to love dance, and music, and fabulous classic movies on Netflix.  A huge devotee of television soap operas, she considered their housing community complex pool, right down the hill from their kitchen window, her own live telenovela of sorts particularly in her later years and she noted with keen interest all that transpired there.

Margie was an excellent writer, and corresponded regularly with countless friends all her life. Her file of address cards reveals many little rough drafts of charming, appreciative notes and holiday greetings she sent, first composed on scratch paper from banks or real estate companies. She rarely gave herself credit for what she accomplished, for she was very modest. She laughed  a lot, and she enjoyed life.

Simple gifts are what Margie appreciated. She was pleased by her beloved See’s Candy butterscotch squares, annual birthday cakes, and fancy holiday mylar beribboned balloons that she “nursed” into two-month lives by carefully rolling up their saggy bottoms and concentrating the helium with a clothes pin.

Marjorie loved her Swiss heritage” like the the special cookies her mother painstakingly made every Christmas with exotic names like Lekerli and Meilanderli. Or Swiss flowers like the rich blue Enzian, or, of course the fuzzy little Edelweiss, the national flower of Switzerland.

For a very intelligent, opinionated, stubborn (all of us Pikes are very stubborn) woman, she really did manage to keep her priorities simple. She loved her family and did whatever she could to help protect our happiness. She was our very best audience in the world. Yes, she told us about what she was doing. But more, she listened to all of us as we narrated our disappointments, hopes and dreams.

There is a line from the beautiful Stephen Sondheim musical Sunday in the Park With George. The audience learns that the protagonist, a version of pointillist painter Georges Seurat, loves most the moments just before first creation, when his canvas is blank white, and offers “So many possibilities.”

Marjorie  allowed us  through kindness to experience so many possibilities to be our fullest selves” the way God intended us to be. We realize that, if we have talents and strengths, and kindness and love toward those around us it is not only because we inherited these traits, but because Mom” and Dad” set such a fulsome example, and modeled how to be good, giving people, and to follow our own passions, and cultivate our own idiosyncratic, good, helpful fulfilling lives.

Mom delighted in flowers.Her actual knowledge of them was far deeper than mine. I loved to hear her pronounce names of blossoms I was clueless about, like Ranunculas. And Marjorie was our flower. Not cloying or over-sweet. No” she was a refreshing spray of beauty. A fragrant surprise when you rounded the corner. A graceful splash of color in the sunlight after you emerged from the forest shadows.

If we just focus on an earth without Mom here” well, that feels like a jagged wound that can never be healed. Instead, we prefer to focus on her 94 magnificent years of everyday generosity and joy as she lived  among us. We prefer to remember her many gifts, presented selflessly and modestly.

We prefer to think of her now as somewhere in heaven, turning her bright, shining face with curiosity and kindness toward God, toward her next bold adventure, and toward the next person who might flourish under her tender care and affirmation.

God’s banner over Mom is love. We know He cherishes her deeply. We trust that Mom in this very moment is experiencing a great depth of grace and recognition of her true calling, and that she is announcing,  in the words of C.S. Lewis, with the wisdom of that great Holy Lion Aslan:

“I have come Home at last!
This at last is my Real Country!
I belong here.
This is the land I have been looking for all my life,
Though I never knew it till now,
[It is] time to Come Further Up,
And Further In!”