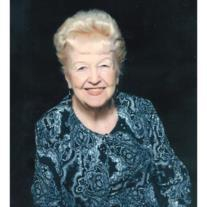 Marilyn Shirley Sullens, our beloved matriarch, passed away peacefully in her home on the morning of November 10, at the age of 87.

Marilyn was born on October 25, 1927 in Chicago, Illinois, only child born to Harry and Elizabeth Dittman. She graduated from Fenger High School in 1945. Soon thereafter, she met the love of her life Francis (Frank ‘Sully’) Sullens, with whom she enjoyed a 47-year love affair ending only with Frank’s death in September 1993.

Marilyn and Frank moved to California with their young family in May 1955. They settled in Santa Ana near Memorial Park, where they raised their two boys. She owned and operated a Merle Norman Cosmetics studio for over ten years, and managed numerous State Farm insurance offices until she retired.

She had a passion for adventure and traveled extensively throughout her life. She delighted in actively participating in the lives of her children and grandchildren, and derived great joy from her ever growing family.

Marilyn is survived by her two sons and their wives, Jack and Linda Sullens and Bill and Debbie Sullens; her four grandchildren, Sean Sullens, Jessica (Sullens) Bramwell, Michelle Sullens, and Melissa (Sullens) Sachdeva; and five great-grandchildren, Carter, Addison, Finley, Ava, Siena and one more on the way. She lived a full life and will be dearly missed by all who had the privilege of knowing and loving her.

A celebration of Marilyn’s life will be held at 11:00am on Friday, November 14 at St. Kilian Catholic Church in Mission Viejo.