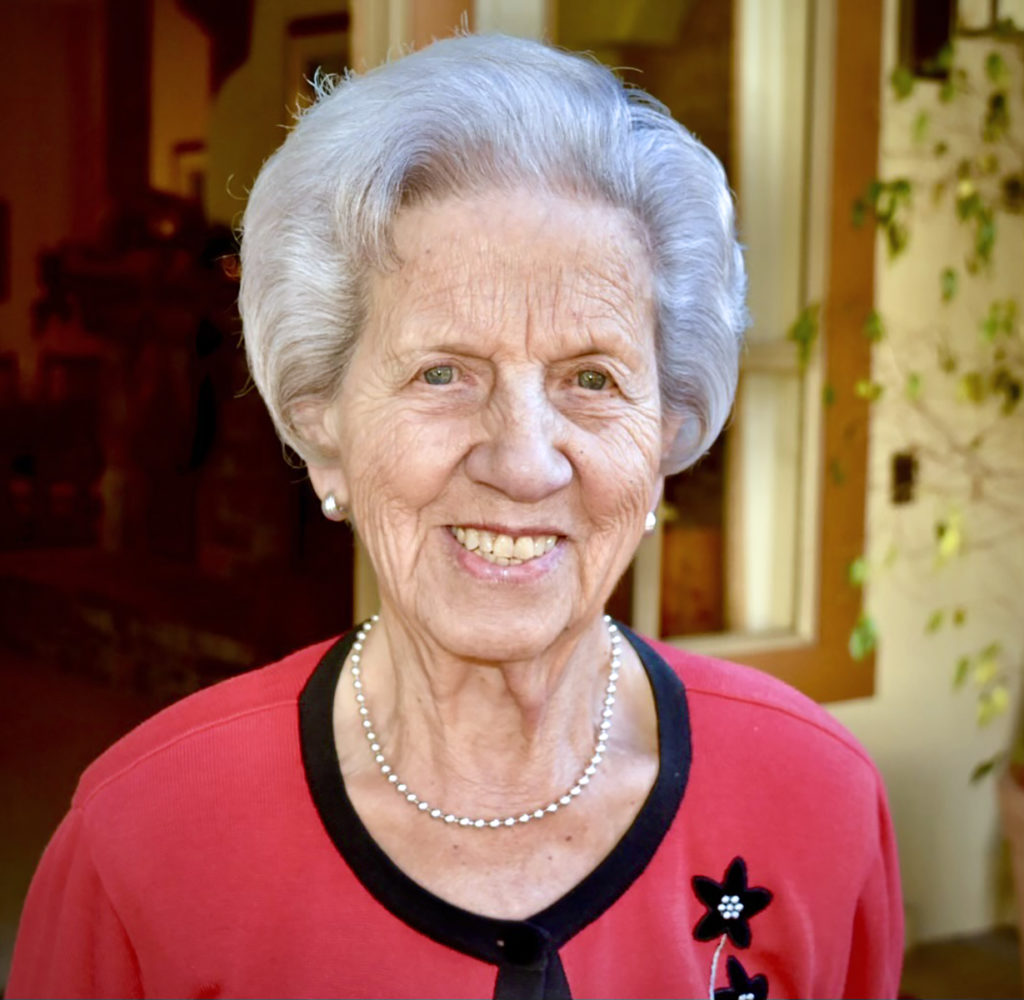 Maria Encarnacion Lacouague, matriarch of our family, passed away peacefully on Saturday evening, April 2, 2022.  After celebrating her 98th birthday only the week before, she joins her husband, Jean Pierre, who predeceased her in 2008.

Our Matchi (short for Amatxi: grandmother in Basque) was born in Ainhoa, France on March 25, 1924, to Doroteo and Isabel Sansinena.  She is survived by her widowed sister, Conchita Irigoyen, and immediate family who remain in Ainhoa.  Her other sibling, Raymond, was deceased in 1962.

Growing up very near the Spanish border in France, Matchi was blessed to learn three languages—Basque, French, and Spanish.  Her teenage years were mostly influenced by World War II and, notably, the German Occupation of France when their little village of Ainhoa was overtaken. The Sansinena family home, located on the main road through town, was forced to house five German soldiers for three years.  Valuables and family heirlooms were creatively concealed as the soldiers confiscated nearly everything at that time.

At 23 and knowing no English, Matchi emigrated to the United States with the encouragement of her lifelong friend and fellow Basque, Carmen Oyharzabal.  Her journey was sponsored by her Uncle Salustiano Sansinena, who at that time was a cattle foreman for the Moulton Ranch—the core of which is now known as Nellie Gail.  Shortly after her arrival, in an effort to learn English, she was enrolled at Marywood High School where she spent two years mostly speaking Spanish with the Cuban nuns who were teaching at the time.

Eventually, she was introduced to a young Sunkist citrus grower in San Juan Capistrano named Jean Pierre Lacouague whose own father, Pierre, was born in her hometown and had also come to America to seek a better life.  Pierre was married to Bonifacia Mujica, from Amayur, Spain.  Jean Pierre spoke fluent Basque which was their common language.  They were married on June 2, 1951.  (Matchi would later say, it was Jean’s Basque that attracted her to him, “He spoke better Basque than me!”)

Matchi became the consummate homemaker, cooking and cleaning daily for her family and the hired hands who helped work the ranch. Juggling the school schedules of four kids while cooking three meals each day when, in those days, our home lacked a dishwasher, clothes dryer, and disposable diapers easily qualified her for sainthood.

She introduced us to our extended family in Europe and encouraged travel, learning her native dialects, and about our Basque heritage.  We experienced all night dancing-in-the-streets fiestas, the amazing beauty of her homeland, multiple languages around the dinner table, and the genuine laughter that came when Matchi recounted her childhood stories with her mother and sister over some wine.

Ultimately, when her children left the family home, Matchi was able to turn to prayer as her time now became her own.  A dedicated prayer warrior and linguist, Matchi prayed constantly and traveled the world daily on her iPad—a prescient gift from her grandson that facilitated her connectivity with the old country.  Now fluent in four languages, she recited her rosary anywhere in the world where one of her native tongues or English was spoken as she prayed for each member of her family and their intentions every day.  She remains an exemplar to us all.

She is survived by her four children: Daniel (Vicki) Lacouague, Michelle (Douglas) Smith, Denise (Joseph) Loyatho, and Renee (Michael) Bondi; eight grandchildren, and four great-grandchildren, all of whom she loved dearly.

Her funeral Mass will be held at Holy Trinity Catholic Church in Ladera Ranch on Friday, April 29, at 10:30 am followed by her interment at Ascension Cemetery in Lake Forest.

In lieu of flowers, please make a donation to the Chino Basque Club. (www.chinobasqueclub.com).