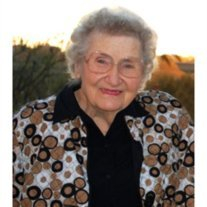 Marian Holland, 92, nee Marian Milligan, was born on December 14, 1920, in Cincinnati, Ohio, to Lottie Tracey Milligan and Bernard Milligan and returned to Heaven on January 31, 2013. Her Irish roots could be traced to her great grandfather, Jeremiah Tracey, who sailed from Cork during the Potato Famine and settled in the Mount Adams district of Cincinnati. Marian was “the scrapings of the pot” – the youngest of 6 children spanning 15 years. Her siblings were Bernard, Mary, David, Donald, and Lawrence Milligan, all of whom predeceased her. The family moved to Los Angeles in 1921, when Marian was still an infant, after her father contracted tuberculosis working in a Cincinnati shoe factory. When Marian was 9, as her father was dying, he asked his good friend Perry Johnston to take care of his wife and children for him. After her father’s death in 1930, Marian and her brothers were soon blessed to have Perry join the family as their stepfather.

Marian grew up in Los Angeles on Bering Cross Street and 52nd Street and later spent her young adult years in Hollywood. She was as close as a sister to her cousin Mary Louise (Tucker) Pruett and their families lived together for a time. Marian always recalled the Great Depression as times of tremendous family spirit (and lots of baked beans!) She attended St. Michael’s and Holy Cross Catholic Elementary Schools in Los Angeles, and had the distinct privilege of attending St. Mary’s Academy High School (she was an “orange tie,”) for which she maintained a lifelong love and respect. Marian told great stories of the “good old days” in Los Angeles: the ice man bringing blocks of ice for the icebox and chipping off bits to give the kids on hot days. She remembered the horse-drawn milk wagon and the fish cart, with all the neighborhood dogs following closely behind, waiting for a fish head to come their way. She remembered Prohibition and an Italian neighbor whose basement wine vats were raided by the Prohibition police. Marian told the story of Harry Nazamita, a Japanese-American man who owned the corner butcher where she and the family dog — went almost daily to pick up groceries. After WWII broke out, Harry and his family were suddenly sent to an internment camp and lost their business. Marian always felt very sorry that the family’s account was never paid to the Nazamita family, who had been so good to them during those tough Depression years. After high school, Marian attended Los Angeles City College for a short time, where she was a pal of the yet-unknown Gene Roddenberry. Academics not quite suiting her (“I never memorized my times tables”,) Marian then graduated from business school and became a superb secretary.

During WWII, her three surviving brothers, Bernie, Dave and Don fought for our country, with her brother Bernie in the Marine Corps in the South Pacific; Dave in the Navy in South America; and Don in the Army, enduring over three years of fierce fighting in North Africa and Italy. Her brothers blessed her with 13 nieces and nephews whom she loved dearly. Marian also did her part for the war effort. She served in the Women’s Ambulance Corps and danced many a dance at USO functions in Los Angeles and the Casino on Catalina Island.

After the war, Marian was a member of Blessed Sacrament Catholic Church in Hollywood and was very active in the Church’s “Fifty-Fifty Club” for young singles. Through the club, she made many lifelong friends, especially Marian Farrell Miller. It was on a Fifty-Fifty Club ski trip to Sun Valley, Idaho, that Marian met the love of her life, George Holland, who was a member of the Old St. Mary’s (San Francisco) singles club. George was a handsome Navy veteran of World War II. In 1953, Marian and George married at Blessed Sacrament Church and began their life together in San Francisco. In 1955, their son George was born and Marian quit work and devoted the rest of her life to being the best mom in the world. Marian joked that she was a bit overprotective with her firstborn, making all visitors wash their hands several times and disinfect them with alcohol before holding the baby. The happy family moved from San Francisco to Southern California in 1957 and settled in Anaheim, where they chose the lot for their new home from an orange grove. In 1959, their daughter Mary Eileen (Mileen) was born.

Marian and George were involved with parish life at St. Justin Martyr Catholic Church in Anaheim and the children attended the parish school. In 1967, George took a new job at the Pentagon and the family moved to Springfield, Virginia. It was quite a change for the life-long Californians but they quickly grew to love their new home and neighbors and the excitement of being in the Washington D.C. area. The family joined St. Michael’s Catholic Church in Annandale, Virginia. Marian remained involved in the children’s school and extra-curricular lives and was most proud with their graduation from the College of William & Mary (George) and Georgetown University (Mary Eileen.) In 1981, her husband George suffered a sudden heart attack and died, leaving Marian widowed at the age of 60. As she later said, it was devastating, but she was young enough to bounce back and create a new life for herself. In 1983, Marian moved back to Southern California and made her new home in Mission Viejo, where she lived the last 28 years of her life and loved every minute of it. At St. Kilian Catholic Church, Marian was a lector, member of the bereavement and grief support teams and involved in the Women’s Council. She was proud to have been nominated by St. Kilian as Diocesan Woman of the Year. She was also involved with the Legion of Mary and Opus Dei, through which she gained and gave — much spiritual support.

Although Marian was devoted to her church activities, she also extended her caring and friendly nature to the community at large. For five years, Marian was a Red Cross volunteer and called homebound elderly persons every day to chat and make sure they were well. For 15 years, Marian was also involved with Toastmistress. She was a founding member of the City of Mission Viejo’s Senior Citizen Activity Team. For years, she made weekly trips to S.O.S. in Costa Mesa, bringing sandwiches. Right up until the last year of her life, Marian volunteered weekly at Mission Hospital in the newborn wing. Being around new life gave her much happiness.

Marian always had an interest in the political scene and it ran in the family. Her mother Lottie was elected to the County of Los Angeles Republic Central Committee in 1921, the year women were first granted the right to vote! She remembers booing Herbert Hoover on the radio. She once claimed to have voted for Franklin Roosevelt all four times he ran, but this story was refuted with evidence that she was only old enough to have voted for him once. Marian was a staunch Democrat until the 1960’s. Then she became a staunch Republican and remained so until she died. During the Reagan Presidency, Marian was a volunteer at the White House and had the honor of attending a Christmas reception with Nancy Reagan in the White House. In 1992, she attended the Republican National Convention in Houston, Texas and returned home more red-white-and-blue than ever before.

No one loved life more than Marian. If she was asked, “Do you want to come over and . . . .” the answer would be “Yes” before the details were even out. Even when she was well over 80, Marian was eager to travel across country to attend her granddaughter Stephanie’s graduation from Emory University and her granddaughter Caroline’s graduation from Duke University. Besides Stephanie and Caroline Holland, she loved her grandchildren Bill and Bernadette Binning and attended all their Serra Catholic School, Servite and Rosary HS school functions and many a sports event. Marian even travelled with her daughter and granddaughter Bernie to Rome, Italy to celebrate her 90th birthday!

Marian made the absolute most out of the long life God blessed her with. She loved her family and friends with all her heart. She laughed often. She was generous with her time and money and gave of herself to make life better for the poor, the hungry and those in grief.

Marian is survived by her son George Holland, his wife Barbara of Florida; granddaughters Stephanie and Caroline of Washington D.C.; and her daughter Mary Eileen Binning, husband Ken and children Bill and Bernadette of Mission Viejo. Her children, grandchildren, family, friends and neighbors will miss her. God has surely greeted her with “A job well done, Marian.”

Vigil and Rosary will be at O’Connor Mortuary in Laguna Hills at 7:00 p.m. on Thursday, February 7, 2013. Funeral Mass will be St. Kilian Catholic Church in Mission Viejo at 10:30 a.m. on Friday, February 8. 2013. Burial will follow at Ascension Cemetery in Lake Forest, California. Joyful colored attire is requested.

In lieu of flowers, Marian requested donations to Operation Smile (888-OPSMILE) which provides cleft palate surgeries to needy children, in honor of her stepfather Perry; or Little Sisters of the Poor (310-548-0625) who provide loving care to the elderly poor.