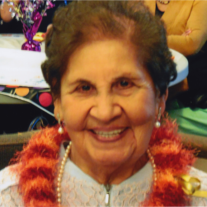 Maria Riano Alvarez was born April 16, 1925 to Campo Elias and Rebeca Riano in Bogota Colombia and passed away peacefully in her sleep March 25, 2017 at her residence in Rancho Santa Margarita, California at 91 years of age. She was one of 7 children, Maria is survived by her son Louis Alvarez, her son Alexander Alvarez, her son Eric Alvarez; brother Hernando Riano and 8 grandsons, Bradley, Alex, Jason, Carlos, Nick, Ryan, Sean and Andrew. She was preceded in death by Luis Alvarez, her husband of 62 years.

Maria being more adventurous than most of her siblings, immigrated to New York City with her brother and enrolled in an English class where she met the love of her life, my father and married in 1950. Soon thereafter she was employed at a major advertising company in New York. During her marriage of 62 years she was blessed with 3 sons and dedicated herself to caring for us and my father. Due to being a devout Catholic, her goal was always to give her children a Catholic education. To that end, she and my father made many sacrifices to allow my brothers and I to attend both Catholic elementary and Catholic high schools. Our mother was always at my father’s side, including spending long nights assisting him with his tax preparation business, even up until she was in her 80s.

As hectic as her life was raising 3 boys, she attended daily mass at her parish St Rose of Lima in New Jersey. One of the most special memories of her life was going to Mexico City in 1986 to visit the Virgin of Guadalupe. Another of the highlight’s of her life was celebrating her and my father’s 50th Wedding anniversary with all of her children, grandchildren & many other relatives. Our mother treasured spending time with her sons and grandchildren. She was a constant source of love, support and encouragement and always available to any of us. She always acknowledged how blessed she was by God to have her 3 sons and 8 grandsons. Among her favorite activities was cooking. It was a tremendous treat to be a recipient of her cooking. Her apple pie and her Spanish empanada and paella were legendary and among the first things that her grandchildren looked forward to when visiting her.

My mother and father moved to Florida in May 2012 to begin their retirement but my father passed away suddenly in September of 2012. Following the heartbreaking loss of my father, my mother agreed to come to live with us in Rancho Santa Margarita, California. In January of 2013, after living with us for about 6 months she opted to move to the Buena Vida Apartment complex due to feeling that she was imposing on us. Although we had some trepidation about her living alone after the death of my father, it was clear that Our Lord was guiding her. To our amazement, my mom truly blossomed and developed many wonderful friendships with the other residents in the apartment complex. She enjoyed participating in many activities and was very independent. She was loved by almost all of the residents of the apartment complex that she would meet and was frequently sought out by them for her wisdom. One of her most wonderful memories was her 90th birthday celebration where many family members and friends from Buena Vida as well as the community were able to attend. She also joined a prayer group affiliated with the San Francisco Solano Church where she developed very special relationships with other Catholics and grew in her faith. Due to declining healthy my mother began to require home care care providers about a year before her death. She not only accepted her providers, but developed strong bonds with them. All five of her providers began to also seek advice from my mother on all matters, be they spiritual, marital and even political, due to her years of accumulated wisdom. When the Doctors at the local hospital informed my mom in February 2017 that her health had declined to the point that required her being transferred to a long term facility for further treatment my mom made the courageous decision to opt for hospice care, stating that she wanted to go home and be with her family and friends for the time she had left. Though her prognosis was dire when she left the hospital, through God’s grace, she continued to have a fair quality of life for 6 more weeks. She was able to have visitors and speak by phone with many family and friends during this time; almost to the day before she passed away. It brought her much peace to participate in daily praying of the Rosary with our family during this time because of her lifelong devotion to the Virgin of Guadalupe. During her final weeks, she faced her impending death with courage and grace and often expressed to me that her greatest anguish in dying was simply that she would be separated from her sons, daughters-in-law and grandchildren. She was called by Our Lord in the early morning of March 25, 2017, the feast of the Annunciation, which our family knows was no coincidence.

Our mother was a truly wonderful human being, who committed her entire life to Our Lord and the Virgin Mary and devoted herself to loving and caring for her children and husband. Her kindness knew no bounds and is what drew many to her. My mom treated everyone with the same respect, dignity, and courtesy and she always acknowledged the innate goodness in us all. The kindness our mother displayed to everyone she met was based on truly believing in something that Mother Teresa once said: “Let no one ever come to you without leaving better and happier.” Though her passing is an unbearable loss, we are greatly comforted by our belief that at the end of her journey on earth the beautiful sound of many trumpets and Our Lord’s loving embrace welcomed her in heaven.

In lieu of flowers, the family would greatly appreciate a donation being made in Maria’s name to St Jude Childrens Hospital.

Please view a video presentation of Maria’s life at http://www.lifetomotion.com/login/alvarez3933/index.html