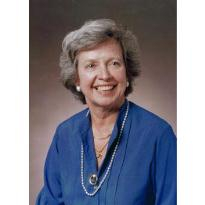 Margery Elizabeth Butler Hartnett passed away peacefully on November 23, 2008. She had been suffering from advanced dementia and was a patient at the Country Villa Cheviot Gardens. Shortly before her death, she was shown a photo of Aidan Joseph Kehoe, and her family believes she understood that she had a new great grandson.

Margery was born in Meridian, New York. Her parents were Thomas Fayle Butler, a Baptist minister, basketball and baseball coach, and Elizabeth Severina Vaughn, a homemaker. She graduated from high school in Woodbury CT as Salutatorian and was voted most accomplished and most ambitious. She attended Wheaton College and then joined the workforce.

One memorable job was managing the ladies hosiery department for Sears Roebuck’s main store in Philadelphia. Walter Hartnett, a young Sears’ employee from Scranton, was assigned to sell candy and ice cream from a roving cart. He strategically parked his cart for a few days near the hosiery counter developing the courage to step up and ask Marge to go out dancing! As a minister’s daughter she had never danced, but Walt persisted.

After their marriage, Margery and Walter, an officer in the Army Air Corps during World War II, came to California where he was assigned as a training instructor at Edwards Field in Mojave. Margery and their infant son Joey lived in Bishop. The family loved California and decided to move to Baldwin Park after the war. They moved around living in West Covina, Palos Verdes Estates, Manhattan Beach, and a mountain cabin in Mill Valley. They had two children Walter Joseph ‘Joe’ Hartnett Jr. 1944 and Janice Hartnett Dolan 1959.

After Margery and Walter relocated to Mill Valley, Walter was diagnosed with advanced lung cancer and passed away in early 1964. Margery courageously reorganized her life and returned to her successful career while raising Janice, then just four years old. The two of them lived in Simi Valley and Palm Desert where she managed General Escrow.

Margery was an outstanding businesswoman with a strong work ethic. She enjoyed being an Escrow Officer for much of her adult life. She made many lifelong friends at work, although you wouldn’t want to be caught making a personal call when Margery was managing the office. She enjoyed living in the Palm Springs area for many years, and was famous for her ‘Bob Hope Desert Classic’ parties.

She was a loyal Democrat and read the newspaper cover to cover every day even the classified. A tireless reader and self-described ‘Radical,’ Marge was quite interested in national and local politics in the desert and later in Orange County. She dearly loved a good political discussion and was a tireless proponent of liberal causes. She was described by her friends as fun-loving and lively, and by her co-workers as caring, bright, well-organized, and responsible. She finished her career working for the Dolan Construction Company in Irvine.

Her hobbies included writing letters to the newspapers, going to the library although in later years she needed to carry a list of authors she liked, volunteering at her grandchildren’s schools, being a Brownies and Cub Scouts leader, a Little League booster, and PTA co-President, and keeping in touch with her many loving friends around the country and with her sister Norma in Jamestown, New York.

Her five grandchildren were her greatest joy in her later years, and every family occasion was ‘the best one ever’. She had an appreciation for nature, and enjoyed country drives along the coast or in the mountains.

After a series of strokes Margery moved to Marycrest Manor, in Culver City where she was lovingly cared for by the Carmelite nuns. She celebrated her 90th birthday there where she and her guests were entertained by the Angelica Strings Classical Quartet and her granddaughter Danielle’s singing.

Words can’t express how deeply her family will miss Margery.

A funeral mass will be held at Corpus Christi Church, 887 Toyopa Drive, Pacific Palisades at 10 a.m., Saturday, December 6. Margery will be buried next to Walter at Fort Rosecrans National Cemetery, San Diego, in a private ceremony.