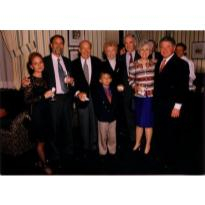 Margaret Robb Brady was born October 9, 1912 in Howell, Michigan, the 4th of 6 children of William E. and Agnes E. Robb. She passed away from complications of Parkinson’s disease on October 8, 2009 in Laguna Woods, California.

She attended Howell elementary schools and St. Mary’s Academy in Monroe, MI and graduated high school from Immaculata in Washington, DC. After graduating from the University of Michigan 1934 she worked at Citizens Mutual Insurance Company as manager of the credit department until the birth of her first child.

She was active in local civic activities in Howell among them the Howell City Charter Commission, six years on the City Planning Commission, a Chairman of the City Election Committee, President of P.T.A., State Hospital Guild, various fund raising drives and was a substitute teacher for the Howell Public Schools. She was also very active at St. Joseph’s Catholic Church.

She moved to Laguna Woods with her husband in 1974 and became involved in her new ‘adoptive home.’ At St. Nicholas Parish, Laguna Woods, as a lector, Eucharistic Minister and ‘Little Company of Mary.’ She was a Board member and Secretary of the Saddleback Hospital Associates. For two years she was in charge of the Associates Annual Fashion Show and served as a model for several of the shows. She volunteered at both Saddleback Hospital and Saddleback Thrift Shop giving over 4000 hours. She served as president of the Saddle Club the first woman to hold that position. She was a member of the Theatre Guild, the Leisure World Historical Society and Leisure World University of Michigan Club. She and her husband were honored as ‘Leisure Worlders of the Month’ in 1988.