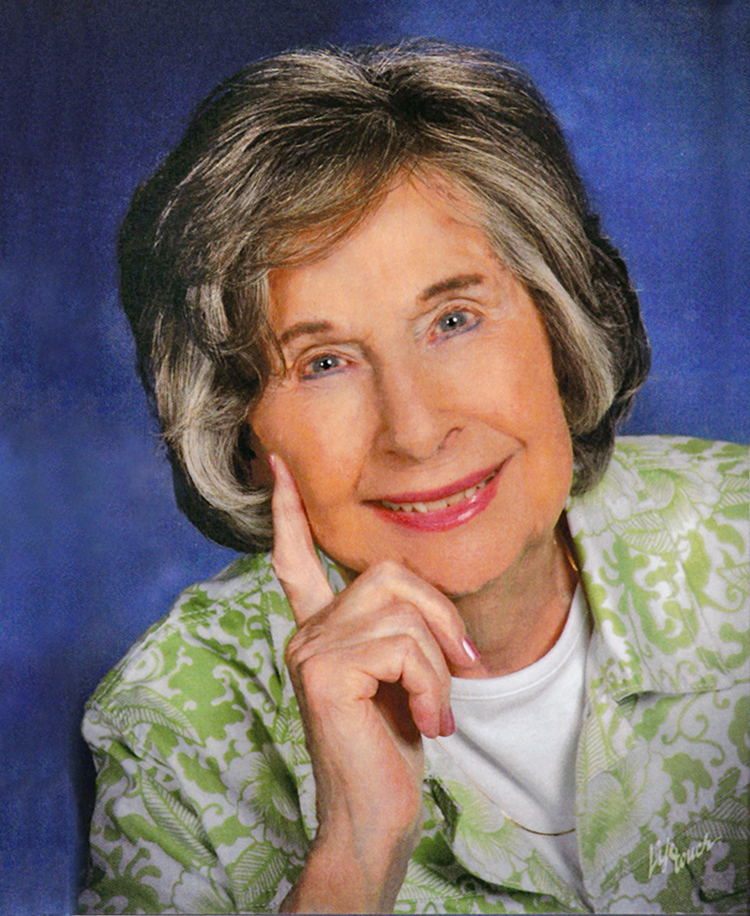 Longtime Dana Point resident Lorraine Edith File Aronson, 94, passed away on May 26, 2018 after suffering a massive stroke in late 2017.  She leaves behind a large circle of friends and an adoring family who all learned from her example the fundamental importance of being kind, caring, loyal and loving.  Anyone who met Lorraine always will remember her cheerful smile and engaging personality, as well as the warmth, sincerity and consideration she showed to others.  She offered constant support and encouragement to those who needed bolstering, and her generous regard for others prompted an active involvement in community affairs.  She enriched the lives of all who knew her.

Lorraine was born in Santa Barbara on December 10, 1923 to Lillian Vera File and Roy Raymond File.  Her father worked for Standard Oil and her mother was a telephone operator at the Gaylord Hotel.  Lorraine was the middle child in the family and she remained close to her older sister, Dorothy, and younger brother, Ray, until their deaths in 2005 and 2009, respectively.

Growing up in Santa Barbara, Lorraine was a bright, outgoing young woman and a talented pianist.  At age 15, she performed with the Santa Barbara Philharmonic Orchestra, playing a Beethoven Concerto.  At age 18, she was the organist for the 1941 wedding of Gloria Vanderbilt and movie producer Pat DiCicco, held at the historic Santa Barbara Mission.  World War II touched her life, as it did so many others.  Lorraine would recall later the agony of seeing many of her high school classmates listed as missing or killed in action.

Her first teaching position was in Bakersfield.  During an evening out for cocktails with girlfriends, she met Milton Richard Aronson, a handsome and witty U.S. Army pilot.  The couple married in 1947 and moved to Los Angeles, where they had three children: Richard in 1950, Sandy in 1957 and Mary Ann in 1958.

Lorraine taught elementary school in the Los Angeles Unified School District for more than 35 years, primarily at Van Alden Avenue School in the San Fernando Valley.  While raising her family, she also gave piano lessons to numerous children over the years, hosted lively dinner parties, traveled frequently to Las Vegas and Mexico, and built many lasting friendships.  She was blessed with many of life’s pleasures, but also experienced painful tragedies.  In 1957, her brother-in-law died after suffering a massive heart attack and, in 1982, her husband passed away after a long battle with a neurological disease.  In 1990, her 8-year-old grandchild, Amy Aronson, succumbed to cystic fibrosis and, in 1991, her daughter-in-law, Linda Aronson, died of ovarian cancer.  Throughout, Lorraine exhibited courage, faith and compassion, and was a source of unwavering strength and comfort to her family.

In 1992, shortly after retiring from teaching, Lorraine moved to Dana Point, where she embraced the next phase of her life.  When she wasn’t shuttling her grandsons to baseball and basketball practice, soccer games or tutoring sessions, she was busy volunteering for the Assistance League, taking bible classes at St. Edward the Confessor Catholic Church or attending regular meetings of the League of Women Voters, the University Women’s Association or the South County Democratic Club.   She was an avid speed reader, maintained an active social life, played lots of bridge, loved watching professional tennis and enjoyed spending time with her family.  For her 80thbirthday, she accompanied her children on a trip to Italy and, for her 90thbirthday, more than 120 of her closest friends and relatives gathered to celebrate the milestone.

A funeral mass honoring Lorraine will be held at St. Edward the Confessor Catholic Church (33926 Calle La Primavera, Dana Point) on June 14 at 11 a.m.  In addition, a vigil service will be held at O’Connor Mortuary (25301 Alicia Parkway, Laguna Hills) on June 13 at 7 p.m.