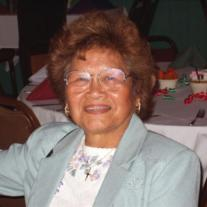 Loretta Chaney passed away unexpectedly March 3, 2012 in Irvine, California at the age of 86. Kitty was born on the big island of Hawaii January 3, 1926. She met and married a young Army MP named Andrew and moved to the mainland after the war. Andy and Kitty settled in Southern California to rear three children, Dennis, Susan, and Vickie. Kitty and Andy were joined in marriage until Andy’s untimely passing in 1978.

For the past 14 years, Kitty lived at The Meadows in Irvine, where she was a friend to many. She was active in bowling, horseshoe pitching, gardening, and crafts. She regularly volunteered her time in service to others at The Meadows.