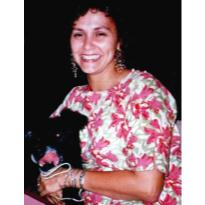 Beloved daughter of Norman and Marilyn Berns and sister of Leslie Berns Richman, Lisa Berns passed away on March 19th 2011. The cause of death was ovarian cancer.

Lisa was born and raised in Buffalo, New York and then made Southern California her home for over 37 years. She attended Orange Coast Community College and the University of California/Irvine.

Lisa’s interests ranged from acting and fashion to make up, meditation and cooking. She worked at Neiman-Marcus and Nordstrom in cosmetics and was involved with the Newport Theater Arts Center. Lisa practiced Siddha Yoga meditation and traveled to India. She created beautiful, artisan cakes and began a business, Sweet Camille, named for her niece. She also catered dinners and events, most notably for Georgia Frontiere, owner of the Los Angeles Rams.

In 1998, Lisa became very active as a Make Up Artist and joined Local 706 as an associate member after working at Fox Digital. She was incredibly dedicated to her artistry and loved to learn new techniques and skills that constantly expanded her knowledge and craftsmanship. Her love of the make-up craft and thirst for knowledge kept her actively growing with every year. She became a Trainee in 2001 and throughout her career she continued working at KTTV, Fox Digital and Fox News, and on television productions such as The Lot, Arliss, The Bernie Mac Show, American Dreams, The Best Damned Sports Show, Scrubs and did numerous commercials. Lisa was very pleased to have worked as a Make Up Artist on the movie ‘Dream Girls.’

Always eager to volunteer her time to various causes Lisa was dedicated to rescuing abused dogs, in addition to caring for her own beloved animals, and was very active with the West Adams Historical Association, the Motion Picture Television Fund, the Artists Coalition for Justice and the Shadowland Foundation.

Lisa leaves behind a wonderful and rich legacy. Her infectious laugh and impish sense of humor touched everyone on some level ? she was fun and adventurous. She corralled her friends and even an 80 year-old neighbor to join ?Full Moon Hikes? adventures in the Malibu Mountains led by a ranger with a flashlight. They protested all the way because it was a work night, only to find that at the top of the ridge the world was magically quiet and lit only by the moon and the stars.

Her mother, Marilyn Powell Berns, predeceases Lisa. In addition to her father and sister, a brother-in-law, Adam Richman, her niece and nephew, Camille Richman and Graham Richman, a large, closely-knit extended family and many dear friends, survives her. Her uncle, Colin Powell, is the former U.S. Secretary of State.