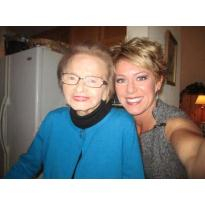 Linda Veytia ‘The Boss’ was born in Puerto Rico USA on August 12 1918. She was given the name Aurora by her father. She was so beautiful as a child her family began calling her Olinda and the name stuck. As the years passed she dropped the ‘o’ became Linda, meaning beautiful.

Linda moved to New York in 1937 to join her sister, Carmen. Linda loved New York it was her favorite place. She would always say, ‘I am a City Woman.’ And she would say ‘There is no place like New York, it is the greatest city in the world.’

In 1938 She met a dashing young man named John. They were married on August 10, 1939. They had their first child, John, on December 3, 1941. Her beloved brother, Manuel, was killed in Battle of Guadalcanal. She was so proud of her brother and spoke of him fondly.

Linda and John moved to Eagle Rock, California in 1948 to be close to her husband’s family who had moved 2 years earlier. She always thought about and yearned to move back to New York City.

Linda worked in Los Angeles as a seamstress while her husband worked at Librascope.

On January 12, 1953, the same day that Lucy Ricardo gave birth to Ricky, they had a girl named Linda Marie. Three years later Sandra was born on June 7, 1956

On September 11, 1960, her beloved husband passsed away and she raised her two girls. In 1974 Linda and the girls moved to San Juan Capistrano. She went to work at DeNault’s Hardware in the household section and if you asked her, she would say that she invented the microwave.

Linda became MOM to everybody all of her children’s friends called her MOM and she adopted them all.

Linda has 8 grandchildren and 8 great-grandchildren. She would always say ‘I spent my life babysitting.’ Her neighbors would come to visit and share cheese and wine. She would make cookies for the mailman and the gardeners. There were always cookies in the cookie jar for anyone who wanted chocolate chips. She would make pizza and was told by her sister ‘You are not Puerto Rican you are Italian.’ She would have Special K with her coffee and wine or as she called it ‘medicine’.

Linda loved to laugh and make others happy. Music, movies and the Oscars filled her life with joy and pleasure. Her favorites were Josh Grobin and Jennifer Lopez. She was a joy to be around. Linda loved all of her family. Mom always wore her high heels. She was proud of never owning a pair of tennis shoes. She was very active in her children’s lives always taking care of her grandchildren. When her grandsons went fishing at the lake near her home, she would make sure they were well fed. She would walk down to the lake in her heals, with sandwiches, milkshakes, cookies and waffles. She loved most everybody.

Linda was a fantastic wife, mother, grandmother and friend. We will all miss her.