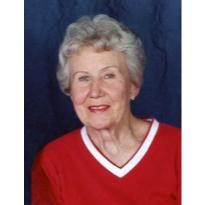 Lenore H. Durrant, 88, a resident of South Ogden for most of her life returned to the God who gave her life on March 29, 2011. She passed away of causes related to age at her family home in Mission Viejo, CA.

Lenore is survived by her son, Doug Betty, her two grandchildren Alyson 19 and Alex 15, two sisters, Carma Harris of Provo, UT and Ranae Dove of Payson, UT. She has been preceded in death by her husband, Jay Durrant; her parents David S. and Lillie E. Hopla; two brothers and her sister, Cluff Hopla, Bill Hopla and Dale Macki.

Lenore was married to Leland Jay Durrant on May 10, 1947 and sealed to him in the LDS San Diego California temple on May 10, 2006. She was an active member of the Church of Jesus Christ of Latter-day Saints. She worked as a contracting officer at Hill Air Force Base in Ogden, UT until she retired in 1989.

It has been a true pleasure having her stay with us in Mission Viejo as her health declined. She has been a great example of courage and kindness in our home. We will miss her deeply, but know that she has returned to the arms of the Lord and is reunited with her family and friends.

I would like to thank my wife Betty for the countless hours and unbounded love that she has shown in taking care of Lenore. She is truly the daughter my mother never had.

Memorial services will be held at the O?Connor Mortuary in Laguna Hills 25301 Alicia Pkwy., Laguna Hills, CA 92653 on Saturday April 9, 2011 at 10:00 a.m. There will be a one-hour viewing immediately preceding the service beginning at 9:00 a.m. Friends and family are welcomed.

A brief graveside memorial service will be held at the Lindquist Washington Heights Cemetery in South Ogden 4500 Washington Blvd., Ogden, Utah 84403 on Saturday April 16, 2011 at 11:00 a.m., where she will be laid to rest next to her husband until called forth in the holy resurrection.