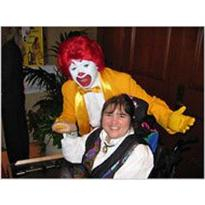 Kim Hill, whose childhood battle with leukemia inspired the first Ronald McDonald House, the model for an international network of temporary housing for families of sick children, died on Saturday in Orange, Calif. She was 44.

The cause was brain cancer, her father, Fred Hill, said. When her family learned she had leukemia at age 3, doctors predicted she would not reach adulthood.

Ms. Hill first came to public attention in 1972, when her father, a former tight end for the Philadelphia Eagles, held a team fund-raiser for the Leukemia Society of America in her honor. Its success ‘ more than $10, 000 was raised ‘ prompted Mr. Hill and a neighbor, Stan Lane, to start their own charity, Eagles Fly for Leukemia, with backing by the Eagles’ owner, Leonard Tose.

The housing idea was suggested by Dr. Audrey Evans at Children’s Hospital of Philadelphia when Mr. Hill and Mr. Lane asked her about ways to use the money they raised. She saw a need for short-term lodging near the hospital for families of cancer patients.

Local McDonald’s restaurants were brought into the effort in 1974, when the Eagles reached an agreement with them to feature the quarterback Roman Gabriel and other players in a promotion for Shamrock Shakes if the franchises would donate a portion of the sales to buy a house. The chain’s regional manager later offered all the shake proceeds if the house was named after their mascot, the clown Ronald McDonald. The Eagles accepted.

Ms. Hill remained a spokeswoman for the houses for years, appearing at house openings and riding on a float celebrating the charity’s 10th anniversary in the 1984 Rose Parade.

Kimberly Michelle Hill was born in Orange, Calif., on Aug. 11, 1966. She worked as a manager at McDonald’s until she was found to have two brain tumors 20 years ago. Mr. Hill said his family first stayed in a Ronald McDonald House in 1991 in Orange County, Calif., when Ms. Hill had the first of five brain operations.

In addition to her father, she is survived by her mother, Frances; two sisters, Kyle and Kristina; and a son, Andrew.