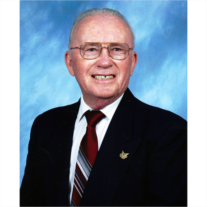 Ken passed away peacefully after a short illness on August 13, 2017, just shy of his 99th birthday. He was born on August 21, 1918, in York, Nebraska, the second of three children to John Tracy and Adah Merle Barnet. His father was a farmer and his mother helped with the farm and ran the household.

In 1934, the Barnet family was part of the Dust Bowl movement from the plains to California, where they settled in Inglewood. Ken graduated from Inglewood High School in 1935 and contributed to the family with several jobs until he joined the Army Air Corps in 1941. He was stationed on Angel Island on December 7, 1942, and his unit was quickly moved to an inland base. He applied to flight school, was accepted and graduated in 1943.

As a 1st Lieutenant and later Captain in the 448th Bomber Group he was stationed as a co-pilot with his crew at Seething Air Base in England. He successfully flew thirty (30) missions over Europe in a B24 Liberator, “Outhouse Mouse” (we have no idea what that name refers to-leave it to your imagination). One sortie over Germany led his plane into a harrowing flat spin and dive for ~10k feet before he and the pilot were able to right the craft, complete their mission at an alternate target, and limp back to Seething where all thought the plane and crew had been lost. After his service in England he was certified as a flight instrument instructor and taught new pilots at Fort Myers, Florida and Long Beach, CA until his honorable discharge in 1946. He earned the following medals during his service: Distinguished Flying Cross with one oak leaf cluster; Air Medal with three oak leaf clusters; European, African, MidEast Campaign – World War II Victory Medal; American Campaign; American Defense; Machine Gun Badge; Army Good Conduct Medal; Rifle and Pistol Badge.

Returning home, Ken found a position with Pacific Telephone and Telegraph, beginning as a lineman and ending as an engineer at his retirement in 1981 after 35 years of service.

While working at PT&T he met a lovely young lady in an office at Northrop Corporation, Oleta T. Love. They dated, fell in love and were married on October 28, 1950. They had three daughters, Sandra, Pamela and Marsha. They were focused on family and enjoyed many camping trips with the kids in a tear drop trailer or a borrowed 15′ trailer. A cross country trek visiting family in New Mexico, Texas, Oklahoma, Tennessee and coming back through Nebraska was a highlight of a sweltering August vacation in 1964 in a Rambler station wagon with no air conditioning.

Ken lived a life of service to all demonstrated by his commitment to his church, First Presbyterian of Inglewood, and over sixty (60) years of service to the Inglewood YMCA through the Y’s Men’s Club, locally and internationally. He was also President of Freedom Village’s Member Council several times, ran the golf tournaments, and served on the Library board.

After 22 years in Lennox and 27 years in Hawthorne, Ken and Oleta moved to Freedom Village in Lake Forest in 1999. They enjoyed their retirement transition to this community and participated in many of the activities offered, including establishing a billiards room for the residents. Oleta passed away in 2003 after 52+ years of marriage to Ken.

In the short years following, Ken dated and married Edythe Emery at Freedom Village in June 2006. They enjoyed a number of international cruises, local trips and infamous Halloween parties, as well as many occasions for music and dancing during the last eleven years.

Ken was a gentleman in every sense of the word. Compassionate and caring to all, always enjoying a good laugh (especially when initiated by Deb Brandt, the honorable 4th daughter), Ken experienced every aspect of life with a positive outlook. He was a beloved and shining example to us all.

Ken was pre-deceased by his brother Bob, wife Oleta, and his sister Eleanor. He is survived by his spouse Edy, daughters Sandy (Ken), Pam (Bob), and Marsha (Susie). He had four grandchildren, Sean, Tracy, Jacque and Ethan, and three great-granddaughters-Paisley, Harper and Riley.

As Ken was an avid supporter of many non-profits, please make any donations in his name to the charity of your choice. Flowers are welcomed for the service.

A Celebration of Life will be held on October 7, 2017, at 2:30 p.m. at Geneva Presbyterian Church in Laguna Woods, with a reception following.

A private interment at Riverside National Cemetery will take place before the celebration service.

Arrangements are being handled by O’Connor Mortuary in Laguna Hills, CA.