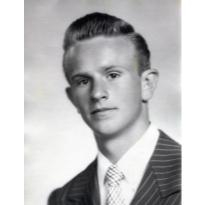 Kenneth H. Salmacia was born on May 19, 1927 in Los Angeles, California, and raised in Glendale, graduating from Glendale High School. He enlisted in the Navy 3 days after his 18th birthday, and served in the Asiatic-Pacific theater on the U.S.S. Lauderdale during World War II. He then attended the University of Southern California, where he developed his life-long dedication to the Trojans, – attending many football games and joining the ?Cardinal & Gold.?

After college, Ken joined his family’s business, Salmacia’s Glendale Music Company, founded by his father, Vincent Salmacia in 1916 and where his mother Flora worked for many years. Ken was well known throughout Glendale as an active member of the Jaycee’s, Rotary and avid golfer at Oakmont Country Club where his father was a founding member. He moved from Glendale over 30 years ago to Orange County residing on Lido Isle, Dana Point, Newport Beach, and most recently Coto de Caza. Golf was a passion he enjoyed his entire life, joining many clubs in addition to Oakmont over the years, including Indian Wells, PGA West, and Big Canyon. He was also one of the earliest members of Marbella in San Juan Capistrano where he enjoyed playing with his many friends right up until his death.

Ken was most proud of his six children, Christina, Cynthia, Steven, Scott, Ken Jr, and Kaycee. Four out of six followed in his footsteps by attending USC. He was overjoyed anytime everyone could make it to a family party, of which there were many. He was fortunate to have enjoyed such an occasion just a few days before his death.

A celebration of his life will be held at Marbella Country Club, San Juan Capistrano on Wednesday, January 5 from 2:00 to 4:00 PM for family and friends.

In lieu of flowers, the family requests that donations be made to the Alzheimers? Association in honor of his mother. A tribute fund has been established in Ken’s name and donations can be made on-line at www.alz.org.join_the_case_tribute.asp or checks can be mailed to either Alzheimer’s Association at P.O. Box 96011, Washington, D.C. 20090-6011 or the local Orange County chapter.