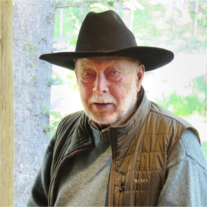 Karl Forman Weber passed away on Thursday, February 25, 2016 at the age of 86 surrounded by his family.

Karl was born in Los Angeles on February 18, 1930. He was one of five children belonging to parents Karl A. Weber and Mary Noyes. He went to Loyola High School and Loyola College, both in Los Angeles. He then went on to serve two years in the U.S. Army. He married his loving wife Tina Anderson on November 21, 1981, to whom he has been married for 34 years. Karl was married to first wife, Mary (Bunny) Hunter, for 25 years.

After being honorably discharged from the Army, Karl went to work for his father and uncle at Weber Showcase and Fixture Company. As the company grew, new divisions were added, such as Weber Refrigeration and Weber Aircraft, and Karl became president of the company. Weber Showcase and Fixture Company was sold in the mid-1960s, which gave Karl the opportunity to create something new. In the late 1960’s, Karl created an all-steel merchandising panel in his garage. He went on to found Uniweb, Incorporated, in 1970, which has grown exponentially over the last 5 decades, and is currently based in Corona, California. He personally held four patents relating to his invention. He was also one of the founders of Aerochem, Inc., in Orange, which chemically milled metal for the aircraft and aerospace industries, and were instrumental in reducing the weight for the Space Shuttle project.

In addition to his inventions and business at Uniweb and Aerochem, his entrepreneurial spirit drove him in a second direction, to Jackson Hole, Wyoming. There, he became a partner in the ownership of Lost Creek Ranch, where he spent summers riding horses, fishing, and hiking. His love of business blended with his love of the outdoors during this time, and Lost Creek Ranch became a successful dude ranch, where guests could experience the Wild West. In 1987, Karl and his wife, Tina, came across a very unique property in the Jackson Hole Valley along the Gros Ventre River, where they founded the Gros Ventre River Ranch. To this day, the beauty and success of the ranch has given Karl much pleasure.

Some of his hobbies included duck hunting, fishing, horseback riding, and tennis. He also had a love for cars. He raced in the Baja 500 with his brother many times, and he had an antique car collection that he was very proud of. To his family and friends, he was famous for his story-telling and countless “Karl-isms.” All his life, he was an avid reader and card player; he especially enjoyed when he got to “Shoot the Moon” in a game of Hearts.

Services will be held at the Sacred Heart Chapel at Loyola Marymount University on April 2, 2016 at 11:30 a.m. In lieu of flowers, donations can be made to Alzheimer’s of Orange County or your favorite charity within Karl’s favorite foundation, Old Bill’s Matching Fund of the Community Foundation of Jackson Hole, Wyoming.

“Make more good mistakes than bad, try to make the world a little better, and enjoy yourself along the way.” ~Karl Weber