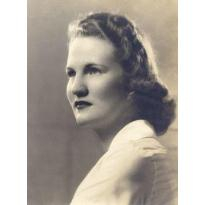 June Priscilla Knott of Laguna Woods died peacefully on December 22, 2008 in Laguna Hills after an extended illness. She was born in Portland, Oregon on January 20, 1921 to Charles H. and Lottie E. Long and grew up in that city. Mr. Long was president of the Maytag Northwest Company, and June enjoyed a wonderful upbringing, including using the family vacation homes in the Cascade Mountains near Zig Zag and at the beach near Gearhart. In 1939, she was selected to the Mt. Hood Oregon Snow Princess Court and enjoyed a trip to California and Mexico.

Her brother Donald, who was fifteen years older, practiced medicine in Coos Bay, Oregon. While in high school, she met George Campbell, a fellow resident of Portland who was attending the University of Portland. She attended Mills College and Oregon State College, where she pledged the Kappa Kappa Gamma sorority, a link that she kept all of her life. George attended Stanford University while June was at Mills, and they were married in Portland on March 7, 1943, while George was serving in the U.S. Army infantry. While he was overseas on army duty, their daughter Carol was born on September 8, 1945.

After the war, the couple settled in Rocky Butte, and then Raleigh Hills, near Portland where George worked in the insurance business as top Casualty salesman with Fireman’s Fund. Two more children followed: Donald, born May 4, 1949 and Karen born March 21, 1955. George contracted cancer in 1955 which ended his career prospects with Fireman’s Fund. He moved to the Frohman Agency in 1957. In addition to being an active homemaker and Kappa alumni, June modeled, participated in several bridge clubs and volunteered at a local hospital. The couple enjoyed golf and social activities at the Portland Golf Club near their home.

In 1961 George was offered an executive line position with Pacific Insurance in Honolulu so the family moved to Hawaii in January 1962. June developed an extensive personalized shopping service for Liberty House, the leading department store. The operation covered the entire globe. The couple enjoyed the wonderful weather and casual lifestyle of the islands. After a second bout with cancer, however, George died on August 15, 1974.

Fortunately, June met and married Kenneth K. Knott, a commercial diver, on August 1976. The couple honeymooned in Hawaii and in England and relocated to California. While Ken was diving at an underwater construction project in the San Francisco Bay area, June opened an art gallery in Menlo Park to display and sell her distinctive ‘art in depth.’ In 1990, Ken and June settled in then-Leisure World and enjoyed a wide variety of social and recreational activities, including dancing, golf, and clubs. June was active in the Republican Club, Kappa chapter, Ebells, Woman’s Club, California Club, Historical Society and Apple Computer club. A particular highlight of her retirement was her selection in 1995 to represent Leisure World in the state Ms. Senior America Pageant in Palm Springs.

June had an engaging smile with a warm laugh, and she was a strong-willed and passionate person. Her keen sense of beauty, elegant bearing and delight in her family will be missed.

In lieu of flowers, remembrances can be sent to: Rose McGill Fund, Kappa Kappa Gamma Foundation, P.O. Box 38, Columbus, OH 43216. Phone: 866-KKG-1870. Donations can be made online at www.kappakappagamma.org