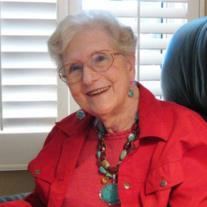 June was born in Prairie City, Iowa, on June 28, 1928, to Dick and Freda Synhorst. She grew up in Newton, Iowa, and graduated from Newton Senior High School in 1946. June received her BA in Vocal Music from Iowa State Teacher’s College (University of Northern Iowa) in 1950. She married Roy E. Taylor on August 21, 1953.

June’s extensive career began in Des Moines as a music and math teacher and later on transitioned to a leader in non-profit management, including executive director of the Des Moines YWCA, Iowa Regional director at Youth For Understanding, and a national education consultant at Batten, Batten, Hudson & Schwab. After retiring, June and her husband, Roy, moved from Iowa to Peoria, AZ, where they enjoyed the warm winters for 24 years.

June was an avid volunteer. She was president of the Des Moines branch of the American Association of University Women, and also president of several chapters of P.E.O, of which she was a 54 year member.

June had a beautiful voice, and was frequently a soloist at civic music performances, weddings, and in the church choirs at the West Des Moines United Methodist Church in Iowa and The Church of the Palms in Sun City, AZ. June was a fashionista who loved clothes, jewelry, and her high heels!

June is survived by her husband of 61 years, Roy, daughters Steffanie Roche (Robert) and Andrea Taylor (Dan Manley), and grandchildren Lauren Cooper (Jeff), Michael Roche, and Joshua Manley. She was preceded in death by her siblings, Betty Synhorst Pittman and John Synhorst.

A private family burial will be held on March 14 at El Toro Memorial Park Cemetery in Lake Forest, CA.