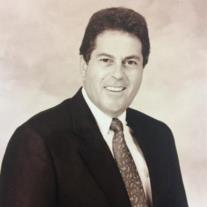 Born January 27, 1942, in Providence, Rhode Island, Julio is survived by his wife and childhood sweetheart, Diana (Tullo) to whom he was married for more than 50 years. He was the son of the late Domenic and Antonette Bergantino.

Julio lived a very fulfilled life, enriched by a successful career, loving family and diverse interests. He devoted 50 years of his professional life to the tire industry, where he was a leading sales and marketing executive-beloved by his dealers and co-workers for his hard work and dedication.

In his spare time, he worked just as hard at spoiling his grandchildren with love, adoration and frequent magical trips to Disneyland and Disney World. “Nothing but fun!” was his favorite saying.

Julio was a lifelong toy train collector and engineer, devoting half of his garage to his ever-changing layout. He was also an avid sports fan, cheering on the Boston Red Sox, NY Giants and Maryland Terps.

Besides his wife Diana, Julio is survived by his children, Robin Hayek of New Market, MD and Julio Louis Bergantino, Jr. (“JR”) of Tucson, AZ; five grandchildren who lovingly knew him as “Papa;” and sisters Annmarie Izzi and Gloria Smith both of Rhode Island.

Julio was laid to rest next to his dear grandson, Jeffrey Hayek, who preceded him in death. The burial took place on February 14 at Mt. Olivet Cemetery in Frederick, MD.