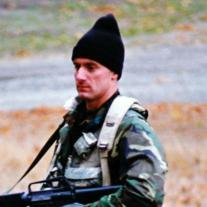 JR Schooley, passed away at home Wednesday September 21, 2011, surrounded by his family, friends and his many pets.

JR was born June 17, 1964, in Orange, California. His family moved to northwest Washington shortly afterward. He grew up and attended high school in Renton, Washington and joined the US Navy right out of high school. After boot camp, he started Basic Underwater Demolition/SEAL training in Coronado, California in January 1983, and graduated with Class 124. Upon graduation from BUD/S he attended Army Jump School and SEAL Qualification Training. He earned his SEAL Trident and was assigned to SEAL Team Five in Coronado.

As a SEAL, JR travelled to many countries including the Philippines, Thailand, Korea, and Scotland and was deployed to Kuwait in support of Operation Desert Storm in 1991. In 1994 an injury led to a medical discharge from the navy. He began a career in the homebuilding industry and worked for several prominent builders as a superintendent, purchasing manager and a project manager. When homebuilding slowed down he went to work for a good friend and fellow SEAL, as the operations manager for his CRBN company. In 2001, JR re-entered the military as a reservist in the SEAL Teams in Coronado.

JR enjoy being a frogman, as well as being outdoors, hiking and biking, he loved to cook and was an avid NASCAR fan, with Mark Martin as his favorite driver. He was clever and creative, always thinking up things to build or make. He participated in the American Cancer Society’s Relay for Life and was involved in several local charities including the Capo Animal Rescue Effort and Homefront America and any other group or organization that could use his talents.

JR is survived by his wife, Holly Carlson Schooley of San Juan Capistrano, his son Jake Schooley of Spring Valley, CA, his father, Duane Schooley, Sr. of Renton, WA, his mother, Shirley Lee of Hemet, CA, his sister, Deb Baker of Bend, OR, his sister Candy Nelson, of Seattle, WA, his brother Michael McFaul, of Ballard, WA, his sister Karie Tarte of Stanwood, WA and his brother Duane Schooley, Jr. of Renton, WA. He is also survived many beloved nieces and nephews. His brother Don McFaul, also a Navy SEAL, was killed in Panama in 1989 in Operation Just Cause.

In lieu of flowers, it was his wish for donations to be made in his name to the Navy SEAL Foundation www.navysealfoundation.org or the American Brain Tumor Association www.abta.org.

He served his country as a Navy SEAL, he volunteered for Capistrano charities and he was always there for a friend who needed just about anything done.

He did it all’from serving with SEAL Team 5 in the first Gulf War to helping other equestrians at Mission Trails Stables’with a laid-back, will-do attitude.

But few who knew him realized J.R. for more than a decade battled a brain tumor. It seemed to be in remission, but showed signs of growth in 2010. And then last week, a cough developed into a hospital stay and blood clots were found in his legs and lungs.

He returned home from the hospital on Saturday, September 17 to be with his family and beloved cats. He passed away on Wednesday, September 21.

“Everything changed so quickly,” Holly said. “We knew it was incurable, but we thought he’d walk out of the hospital on Wednesday.”

J.R. wanted to be in the couple’s Mission Glen home, though, where he could be with his four cats, two dogs and talking parrot. The couple also has three horses boarded at Mission Trails Stables.

His family’J.R. is survived by five siblings and a son, Jake, from a previous marriage’was there when he passed away, Holly said.

“When he got home, I think he decided he didn’t have any more reserves to call up,” said Holly, J.R.’s wife of 13 years. “When I look at the last year, I can’t believe he went so quickly.”

The couple had been to Disneyland with a niece, been to Washington state, attended a West Coast SEALs reunion in Coronado and even bicycled the majority of a 450-mile ride in Iowa with Holly Schooley’s father.

The ride was an annual favorite of Holly’s dad, and she’d said she’d ride in his 20th. And when she said she’d do it, that meant J.R. would do it, too, because that’s just the way he was.

He did things his own way, though. When a neighbor complained his dogs were barking too much, J.R. posted a sign in front yard asking people not to approach the home to leave fliers, because that would make the dog bark. But the sign also urged passing motorists to honk their horns if they loved pets. The neighbor complained to City Hall, but J.R. said it was a First Amendment right.

Another time, tired of seeing trash along Ortega Highway, he and his son walked the road through town, filling up trash bag after trash bag with litter.

J.R. was active in Capistrano Animal Rescue Effort and Relay for Life and also a strong supporter of Homefront America, a San Juan Capistrano charity that supports military families. J.R. and Holly participated in the charity’s chili cook-off, not only with a chili recipe but by making and selling tri-tip sandwiches. They’d donate the proceeds to Homefront.

The military was long a part of J.R.’s life. He joined right after graduating from high school in 1982 and served 12 years before a shattered ankle led to a medical discharge. He was reinstated as a reserve in 2001. It ran in his family: His brother, Donald L. McFaul, was also a Navy SEAL and was killed in action in Panama in 1989. Chief Petty Officer McFaul, who left safe cover to save another serviceman, was posthumously honored with the Navy Cross and a Navy destroyer is named after him.

As Holly Schooley sorted through photographs and memories in the living room of their home on Tuesday, she wore a gold chain with J.R.’s wedding ring and a gold trident’the SEAL symbol’around her neck.

In lieu of flowers, the family requests donations be sent to the Naval Special Warfare Foundation, www.nswfoundation.org