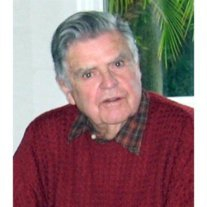 Joseph Thomas Clark of Laguna Niguel, CA died early Wednesday morning, September 11th, at the age of 87. Joseph passed away peacefully at home with his loving family by his side. He is pre-deceased by the love-of-his-life and wife of over 65 years, Gertrude (McCormick) Clark. His son Michael Clark of Laguna Niguel, CA and his daughter Lois Clark Curren and her husband Christopher Curren of Los Angeles, CA, survive him.

Born and raised in Providence, RI, Joseph was the son of the late Thomas Clark and Mary (Meledy) Clark, and brother to the late Catherine Domina and Mary Morrissey. His sister, Isabel Skelly of Barrington, RI, survives him.

Joseph attended LaSalle Academy in Providence, RI and was invited to take part in the V-12 Navy College Training Program. He soon married his high school sweetheart, Gertrude McCormick, in Providence at the Cathedral of Sts. Peter and Paul. The couple moved to Cheshire, CT where he was employed by the New Haven Railroad. It was then on to Akron, OH where Joseph worked for Cabot Corporation in Regional Sales. Joseph was an avid golfer and scored two holes-in-one as a member at Fairlawn Country Club. When the family moved to Southern California, they remained active at Oakmont Country Club in Glendale. Joseph and Gertrude had been residents of Laguna Niguel and St. Kilian parishioners for more than 36 years.

Those who were lucky enough to know “Joe” could attest to his omnipresent friendliness, his quick mind, his kind loving heart, his famous sense of humor and his ability to bring a smile to anyone’s face. There wasn’t an animal or a child who didn’t adore him. He was a patient and devoted Father who nurtured and inspired his children, and a Husband whose adoration for his Wife knew no bounds. Words cannot express all the nuances of this amazing soul, nor describe our sorrow at his loss. Dad, we love you eternally. Make them smile up there!

A private family viewing will be held at O’Connor Mortuary in Laguna Hills, CA at 4PM on Sunday, September 15th. The funeral Mass will be celebrated at St. Kilian Catholic Church at 9AM on Monday, September 16th followed by the burial at Ascension Cemetery.