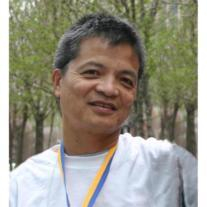 Joseph Sicat, 61, of Irvine, CA passed away after a two-year battle with brain cancer as the sun came up on Monday, November 26th, 2012.

Born in Pampanga, Philippines, Joseph grew up on a farm with 8 brothers and sisters and very humble means. He took an opportunity to change his life circumstances to come to Los Angeles, CA in 1972 where he worked as a technician, waiter for a young Wolfgang Puck and eventually entered a long career in computer sciences.

While working for various Irvine based technology firms, Joseph rarely missed his children’s sporting events and practiced with them frequently. He also fulfilled a lifelong dream in 1995 when he graduated from college, through a self study program, showing again his determination to succeed regardless of life circumstances. Both of his children followed in his footsteps and graduated from college within a decade later.

Joseph lived a healthy lifestyle all his life running, playing sports and eating organically. He learned quickly by reading books to learn about computer programming, landscaping, home maintenance, religion and more. He was also athletic and played pickup basketball at the local gym with men half his age and played golf with his son, where he shot a 75 only days after his third surgery. Most importantly he was a kind family man who lived a life with integrity with every action and word spoken.

There will be a viewing on Friday at 25301 Alicia Parkway in Laguna Hills from 5:00 – 9:00pm. There will also be a Mass and burial on Saturday, December 1st starting at 12:00pm at St. Thomas More Church in Irvine, CA.

Joseph will be survived by his wife and two children. The Sicat family is grateful to all of his brothers and sisters who supported him over the years, especially through the last couple of years by giving him reasons to laugh and recognize his accomplishments.