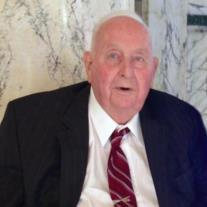 Joe graduated from Clinton High School in 1945 and served in the Sea Bees in World War II in Guam. In 1948, he and a partner, Chuck Carlton, opened Country Market on Michigan Avenue west of Clinton, MI. Later in 1975 with his sons and Charlie Mattis, he founded J & C Family Foods, now Busch’s Fresh Food Market which has 15 stores operated by his sons.

Since 1986, Joe and Marcheta have spent their winters in Dana Point, CA and summers in Clinton, MI.

He was a Rotary member, a Cub Master and a life member of American Legion, VFW, Knights of Columbus & St. Dominic’s Catholic Church.

His parents, Alfred and Anna, his stepmother, Claire Busch, his three brothers Wilbur, Alfred & Nelson, all predeceased him.

There will be a viewing on Saturday, November 21, 2015 at 11 a.m. at St Timothy’s Catholic Church, 29102 Crown Valley Pkwy, Laguna Niguel followed by the Mass of the Resurrection celebrating his life at 12p.m.

We appreciate all your prayers and love especially over the most recent months of his illness.