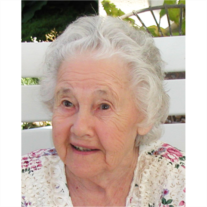 Josephine “Pepita” Romero passed away peacefully at her home on St. Joseph’s Day, Saturday, March 19, 2016 at the age of 103 years.

Josephine was a long-time resident of Reseda and Montebello, Ca. She moved to San Juan Capistrano in 1978 and was a friend to all she met. She was very active in San Juan Seniors for many years and was crowned “Honorary Senior Citizen Queen” when she turned 100 years of age! She will be always be remembered by the many friends she made at Seniors’ Club because of her always pleasant, gentle, and kind manner. Her children and many grandchildren always remember her as a wonderful example of living with grace, dignity, and loving attitude towards all.

A funeral Mass will be celebrated at Mission Basilica San Juan Capistrano on Thursday, April 7, 2016 at 10:00 am. The rite of Christian burial and internment will be held at Mission San Luis Rey Cemetery in Oceanside on Friday, April 8, 2016 at 11:00 am in a private ceremony.