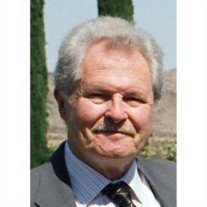 John van Rikxoort, the son of Adriana and Cor van Rikxoort, passed away on February 27th, 2013 at the age of 69. He was born on February 2, 1944 in Vlaardingen, the Netherlands and moved with his family to the United States as a young man.

He proudly served in the U.S. Navy for four years during the Vietnam War and after he was honorably discharged, he married his wife, Nada, with whom he had two children, Natalia and Erik. John worked as a sales representative for the plastics industry for over 30 years before he retired and moved to Mission Viejo, California. He is survived by his wife, children, and sister, Jeanine van Eyk.