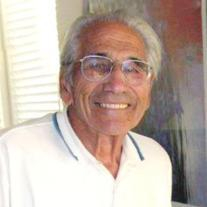 John Stephen Miller was born in 1921 in Winnipeg, Manitoba, Canada. He passed away on March 3, 2012 in Mission Viejo, CA at the age of 90. John was retired from working as a Service Manager for over 50 years at various automotive dealerships.

John lived a wonderful life with his wife, Mary Miller, who passed before him. John first worked on a family farm in Elma, Manitoba with his siblings until he moved to Winnipeg to pursue his many ventures in life.

He met his wife, Mary, at a mutual friend’s wedding. They fell in love from that very first meeting.

They later moved to the United States in July 1962 to make a home in California.

One of John’s favorite past times was carpentry and building. He was a “jack of all trades” and a perfectionist in everything he did.

He was always ready and willing to lend a hand to anyone in need. Both he and Mary loved to entertain people at their home.

Through his daughters, John got involved with Arabian Horses and later owned a horse ranch in Chino, CA for many years, showing and selling horses.

He always said he hoped, in God’s eyes, he was a good person and tried to help all he could. He was a one-of-a-kind gentleman who will never be replaced.

We will miss him very much.

Goodbye Dad/John, until we meet again in a better place,