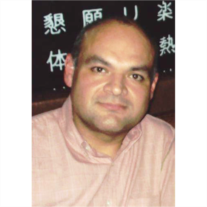 John is survived by his parents Frances and Enrique Juarez, sisters Sylvia Aguilar and Leticia Juarez, brother Ruben Juarez, sister-in-law Yvonne Tallabas, nephew Israel Aguilar, nieces Sienna Juarez, Briana Alcantara, Shayla Juarez, Savanna Juarez, and Viviana Alcantara. John’s nephew and nieces were his pride and joy. He loved them as his own children. He was an awesome Uncle John.

John was an Attorney Clerk with the Orange County Dept. of Child Support Services from 1999-2014. He made many great friends there and continued the friendships after his resignation to pursue a career in law enforcement which was his lifelong dream.

John was very passionate about football and was a huge USC Trojan fan. He loved going to the games with family and friends. John was also a NASCAR fan and always looked forward to the races in Fontana. He was also a big Howard Stern fan and would listen daily without missing a broadcast. John loved watching Beavis and Butthead and would memorize their lines and imitate their voices to a tee. He also loved to watch the show Breaking Bad and had every single episode memorized.

John was a gun enthusiast and enjoyed hunting and range shooting. John also loved to travel, especially to the East Coast.

John made an impact on every person he met including strangers. He was a great storyteller who always held a captive audience, which came so natural to him. John’s intelligence was off the charts and he had such a great memory that was almost intimidating.

If one could describe John in just two words, it would have to simply be, GREAT GUY.

John was loved more than he could have ever imagined. He’s either scratched, dented or left holes in people’s hearts by leaving us too soon.

Rest in peace our beloved John.