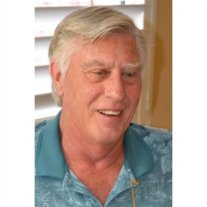 John Danforth Benson of Lake Forest, CA passed away March 21, 2013 at the age of 65 at his home after a brief illness.

He was born in Albion, NY on April 16, 1947 to Mary Helen and M.D. “Bill” Benson. His family, which at this time included his younger brother Tom, moved to California when he was only a few years old. The family lived briefly in San Francisco, CA where his sister Karen was born, and then settled in Whittier, CA where John attended both elementary and high school.

After high school, John attended California State College, Long Beach. It was during this time he was introduced to his soon to be bride (and love of his life), Sharon Lee Palm on a blind date. They married on December 19, 1970 and spent 42 wonderful years together.

John was an avid baseball fan. He fell in love with the game at a very young age and never lost his enthusiasm. He was a big fan of the Angeles and was looking forward to opening day.

During his working years John became involved in the trucking industry. In the mid 1970s he began working for a ‘heavy haul’ trucking company which proved to be his ‘niche’. He was passionate about his work planning the logistics involved with hauling oversized machinery. He loved the challenge, complexity and creativity required to move equipment weighing up to many tons.

After retiring in 2012 he began to focus on other activities such as pool and bowling leagues, family gatherings and travelling to Las Vegas, Laughlin and local casinos with friends.