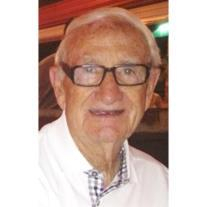 On Tuesday 9/22/15 at the age of 83, heaven received an awesome, loving, gentle and wonderful husband, father, father-in-law, Poppa (grandfather), brother, brother-in-law, uncle, friend, and all around terrific car salesman.

Jim met his loving wife Madge Wells of Cardinal ON in the spring of 1955, and on Oct 1 of that year they became one, and remained so until the Lord took Jim home just 9 days from their 60th anniversary. They shared a deep unconditional love for each other and in this relationship that is coveted by so many, it was not uncommon to visit and find them sitting together in a chair made for one. Or when Jim was watching his beloved LA Kings on TV he and Madge would often hold hands from their adjacent chairs.

Jim is father to Wendy Adams (Chuck) of Mission Viejo CA, Jeff of Mission Viejo CA, Kelly Stewart (Brian) of Tustin CA and his youngest Billy Tom (deceased). Jim leaves 9 grandchildren; Alicia Adams, Ben Adams, Jordan Adams, Sam Adams, Brittany Buckley (Stewart), Ashley Trzcinski (Stewart), James Stewart, Ryan Ward and Blake Ward. The priority and ultimate joy of both Jim and Madge’s life was spending time with their children and grandchildren and were blessed with being able to do that often as all live in the same area. Jim kept family first in his life and made certain that those married into the family were welcomed and loved as equal members. For several years Jim and Madge’s home became the Hotel California for those relatives and friends from Canada who came to visit, never turning anyone away.

Jim had a successful and long career as a car salesman which began in 1955 in Brockville ON at Billings Motors. He eventually took over his father-in-law’s used car/service station business in Cardinal ON until he became GM of Cardinal Motor Sales, and then to Seaway Motors in Johnstown ON where he sold cars until Jim and Madge packed up the family and moved to Southern California in Jan of 1978.

The move was to have included youngest child Billy Tom but the Lord took him home in November of 1977 just shy of his 8th birthday after his battle with childhood leukemia. (It was Billy Tom’s disease and the impact of the harsh winters on him that precipitated the move. Having taken over two years to get approval for legal entry into the US, Jim decided to proceed as planned). Oldest daughter Wendy and her husband Chuck and daughter Alicia joined them in California six years later. The move for Jim and the family was a bold one, having sold their house, furniture etc., keeping only heirloom valuables and clothes – all of which had to fit in a 10′ U-Haul trailer that was pulled behind the family car. Essentially starting over and without a job waiting for him, Jim led his family from Canada to a new life in Southern California.

Jim wasn’t without work for long and shortly after they arrived in Jan 1978, Jim began the second phase of his career, having had several offers and choosing Nabers Cadillac (now Orange Coast Buick GMC Cadillac) where he remained as a salesman until he retired (sort of) at the age of 81. On May 3, 2003 Jim’s picture was featured on the front page of the business section of the Orange County Register where he was interviewed by the reporter who labeled him “Cadillac Man”. He was the consummate people-first salesman. While Jim was hospitalized in the CCU (hooked up to a ventilator, attached to a tracheostomy and feeding tube and not long after being semi-conscious due to CO2 issues in his blood), he scratched a cryptic sentence for his son Jeff to go to his desk at home and find a paper comprising a list of selected options and features for a new Cadillac SRX for a long time customer. Jim wanted it sent to a named associate at the dealership so the order could be placed, thus not letting his customer down in spite of his illness. He always thought of his customers first in business. But he also thought of those he worked with and whom he treated with the utmost respect, from service mechanics, back office staff, fellow sales reps, all the way to the GM and Mr. Nabers (when he owned the dealership).

Jim often would privately give money at Christmas to those he knew at work with children and who were struggling financially, so as to help make their Christmas a little better. Jim/Dad/Poppa/Jimmy leaves an awesome legacy and no doubt an indelible impression on all who have had the pleasure of knowing him and loving him. His homecoming leaves a large hole in the lives of his wife Madge and family but they all know that he is with his Lord and Savior Jesus Christ and they know that having accepted Jesus as their Savior as well, that one day the family will have a complete reunion again.

A Celebration of Life is planned for some time in November.

In lieu of flowers please send donations to the Myasthenia Gravis Foundation of America http://www.myasthenia.org/HowcanIhelp/Donations.aspx