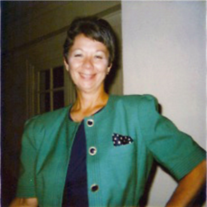 Jean was born in Minneapolis, MN on April 12, 1934, the fifth child of George and Emily Abraham. She graduated from North High School in 1952 and began her career as a flight attendant for TWA in 1958. On October 27, 1962, Jean married the love of her life, Carl Adams in Chicago, IL. The couple settled in St. Charles, IL where they raised their two daughters, Lisa and Amy. After 35 years of traveling the world, Jean retired as a career flight attendant in 1993. She and Carl moved to Bull Shoals, AR in 1993, then later relocated to Twin Falls, ID in 2006 to be closer to their daughters and their families. In 2009, after 47 years of marriage, Jean lost her beloved husband, Carl. She spent her final years in Mission Viejo, cared for by family and friends.

She is preceded in death by her parents, George and Emily Abraham; four siblings, Lorraine Forbes, Murelle Paulson, George Abraham, and Betty Doonan; and her husband, Carl. She is survived by daughters Lisa (Pete) Antonic of San Clemente, CA and Amy (Lance) McBride of Twin Falls, ID, and her six grandchildren, PJ, Ellie, Thomas, and Sofia Antonic and Colin and Avrey McBride.

Jean always dreamed of seeing the world, something she was able to achieve in her career as a flight attendant, often accompanied by family and friends. Her TWA “family” of flight attendants were life-long friends of whom she had over five decades of fond memories of working together, traveling together, and being there for each other.

Jean will be remembered for her love for family, her gregarious personality, and her contagious laughter. She loved to watch old movies and sing along with her favorite crooners. To her family and friends, she embodied the glamour of old Hollywood that she so admired.

Funeral Mass will be held at St. Edward The Confessor Catholic Church, 33926 Calle La Primavera, Dana Point, CA on Friday, July 15 at 11:00 am. Rosary will begin at 10:15 am. In lieu of flowers, donations may be made in Jean’s name to Alzheimer’s Society at www.alzheimers.org.uk/.