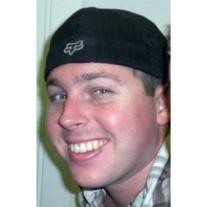 There is so much to say about Jason — he lived in San Juan Capistrano and he loved being so close to the beach. He would ride his bike to the beach many times with his iPod plugged listening to his favorite music, and he enjoyed just cruising around. Jason is already missed by his mother, Lynne and his brother, Chris (his ‘buddy’) and we are so very blessed to have so many wonderful memories of Jason. There were so many family trips, holiday’s together, laughter, and we have been ‘truly gifted’ with Jason’s presence and he will always be with us and part of us – we are still a ‘family’.

Jason loved life and he had a deep faith which touched so many people. Jason would always said -‘family is everything’. He loved taking vacations with his family to New York, Jamaica, and Cabo,. Jason loved the times he got to visit with his Uncle John, Aunt Marge and his ‘cousin’ Leighann in New Jersey. Jason said at times that he missed his Grandma who is in heaven and now Jason is with her. He just loved ‘shooting pool’ with her.

Jason loved the times he spent with his brother Chris, and his many friends to so many places – Glamis, Dumont Dunes, Ocotillo Wells. Jason loved getting lost with his Yamaha ‘Raptor’ the sand dunes. Of course, Jason couldn’t leave his Honda 50, behind and he would ride that as well in Ocotillo Wells. Jason loved camping with his friends and when the weather got too hot, that never stopped Jason, since he would then be ‘tubing’ with his friends at La Jolla Indian Reservation. He loved driving up to Big Bear to snowboard with friends and he would love it even more when everyone would have to stop and ‘chain up’.

When Jason wasn’t out doing these things, he would be so content at home working on all his ‘toys’, customizing them and making them perfect for the next time that he would take them out. He loved the road trip up to Laughlin and the ‘wake-boarding’ and also lounging on the ‘river’. At the end of a long day, Jason would love relaxing with friends while listening to the stereo at the ‘spa’. Jason would have to capture every trip that he took with his ‘waterproof’ camera so that everyone could look back on the memories.

He loved being around people and he really loved animals, especially his cat, Nuggles. Jason loved Christmas and then of course, there was Halloween, which was his birthday – so there were always so many ‘stuffed’ pumpkins always on display in his room. Jason even made the small boring things fun, he was all about enjoying life with everyone. Jason would smile when he would listen to your stories and he truly listened to you if you had anything that troubled you, and he would try and help you.

Jason’s laugh just can’t be described, it was infectious to anyone around him. He would make you laugh so hard, you had trouble breathing since you were laughing so very hard. When Jason smiled – his blue eyes would actually sparkle, as you can see in his picture. He is already missed by so many whose lives he touched. The wonderful memories of Jason will be shared by many. He lived his 28 years as being a wonderful, kind and loving person to so many people, and his presence will always be with us in the memories that we have of him.

Jason had a deep love of God and Jason is now with Our Lord.