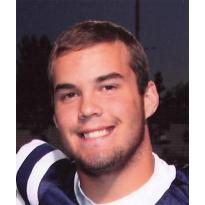 Jaron Lee Scrivens was born in Santa Ana, CA where he lived with his parents Mike and Lisa Scrivens and his three older brothers, Bryan, Joseph, and Bennett at their home in Tustin, CA.

After moving to Corona, CA in 1996, Jaron played soccer and was involved in Scouting and his church. During his time in Corona, Jaron earned many Student of the Month awards and in sixth grade, while attending Prado View Elementary, Jaron was named the Student of the Year. Going into Junior High at Rainey Intermediate Jaron was accepted into the International Baccalaureate Program for academic high achievers.

Jaron and his family moved back into Orange County in 2002 and lived in Foothill Ranch. He went to Rancho Santa Margarita Middle School and Trabuco Hills High School. Beginning in his freshman year, Jaron joined the football team. Even though a broken leg sidelined him for much of the season, he still went diligently to all the team’s practices and games. He played on the Junior Varsity team when he was a sophomore and on the Varsity team during his Junior and Senior years as a Center and Offensive Lineman. Jaron loved to play football and was hoping to eventually play for BYU.

Jaron graduated from Trabuco Hills High School this past June. He had just started college at Brigham Young University in Salt Lake City and had plans on serving a two-year mission for the Church of Jesus Christ of Latter-day Saints in about a year.

Jaron passed away in a car accident on September 17, 2007 outside of La Grande, OR. He was returning to school after visiting with family in Vancouver, WA. Jaron had many friends. He lived his life with high standards and was an example to all that knew him. He was a unique individual in that he was considered a friend by both adults and youth.

Jaron is best known for his ability to walk into a room and make the world seem brighter. His smile was a comfort to all that were blessed to see it. When he spoke, his voice was a deep bass, but he had a distinctive giggle that would only make you laugh harder when you heard it.

There is no doubt that Jaron has departed this world with a clear conscience, clean hands, and a pure heart. Jaron will be missed by all who were blessed to have known him.