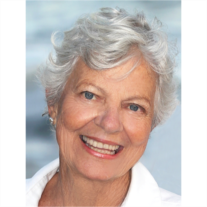 Jane Niblock Hutchinson died peacefully in her home surrounded by loved ones on September 19th, 2017 in Mission Viejo, CA. Jane was born on April 3rd, 1942 in Chicago to Charles and Marguerite Niblock. Although raised in Homewood, a Chicago suburb, Jane’s most cherished friendships were formed during summers spent at Clark Lake in Door County, Wisconsin. Jane often shared stories about carefree days spent swimming, waterskiing, skinny-dipping and picking cherries.

Jane attended Homewood-Flossmoor High School near Chicago and graduated from Monmouth College which was home to several family alumni (grandfather, father, brother, uncle, husband, father-in-law, sister-in-law, niece and great aunts). She was a member of Kappa Delta sorority and sang in the choir which once traveled to Southern California. Little did she know that this corner of the world would play a larger role in her life. She met her future husband, Jim Hutchinson, having picked him out of a school yearbook to be her date on an upcoming hayride with their brother fraternity.

After college, Jane and Jim married and moved to Rockford, Illinois, where she was a social worker. Their first daughter, Heather, was born in 1968. The family then moved to Pittsburg where they lived in a tiny farmhouse on an apple orchard (so Jane). Jane often had to heat the drafty farmhouse by opening up the oven. In 1970 Holly was born and Jane welcomed the move to sunny Southern California for Jim’s career in the water purification industry. She devoted her time to raising Heather and Holly and making their new house a home.

Like her garden, Jane cultivated and nurtured many relationships that would develop into lifelong friendships: Cataluna Circle neighbors, church friends, Bunco buddies, tennis teammates, PTA, soccer… a lifetime of volunteering. She had a way with living things and they all thrived in her care. After the girls had grown, Jane and Jim travelled more. Always up for adventure, Jane planned trips up Half Dome, down the Colorado River, between great chasms in France, through the Panama Canal, across snowy mountains, around New Zealand islands, and along the OUTSIDE and ON TOP of the Sydney Harbor bridge.

Throughout all of life’s transitions, Jane remained close to her brother John and her sister Mary, often gathering at the beloved summer cottage. Family traditions (catching minnows, fireworks and skits) and secret recipes (strawberry shortcake, cherry pie and cherry bounce – a bootlegged “spirit” that could cure a cold and strip off old paint) were passed down to the next generation. The legacy of the lake continues.

Jane will be remembered for being quick to help, for seeing the good in others, for living her Faith, for adding a splash of imagination to all she touched. She was an artist who colored the lives of those she loved.

Jane is survived by her husband James Hutchinson; daughters Heather Athanasiou and Holly Osborn; her grandchildren Alex, Olivia, Maddie and Fischer; her brother John Niblock and her sister Mary Crawford. A celebration of life will be held in Door Country in the summer of 2018. The family asks that individuals honor her memory by lighting a candle, noticing the colors and beauty around you, and never passing up an opportunity to help others or try something new. We love you Jane.