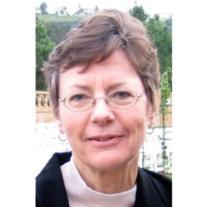 Jane moved to Muncie, IN at the age of 11, graduated from Burris High School in 1968 and received The Betty Crocker award. Jane also served as a photographer on the staff for the Burris yearbook. Jane graduated from Ball State University in 1972 with a Bachelors Degree in Home Economics, and was a member of Beta Sigma Phi and the Mary Beeman Organization. Jane worked and lived in Indianapolis, IN immediately after graduation from Ball State.

In 1988, Jane moved to California and began working for Western Growers Association in Costa Mesa, CA where she was a dedicated employee for the past 22 years. Jane enjoyed cooking and crafts, especially sewing, and decorating and celebrating all the holidays. She enjoyed her cats and loved Greyhound dogs, adopting several over the years, and frequently travelled to Idyllwild, CA to combine holidays, pets, friends, and the mountains.

She was preceded in death by her brother, Terry A. Ulrich and her mother, Elizabeth M. Mansell Ulrich.

A family memorial was held in Jane’s honor on Thanksgiving evening in Indianapolis. A memorial service will be held in Laguna Hills, CA Wednesday, December 7th at 4:00 at the O’Connor Mortuary. A subsequent service will be held in Muncie, IN in late-December. Tributes and memories can be shared on Jane’s CaringBridge site at http://www.caringbridge.org/visit/janeulrich

Contributions in Jane’s memory may be directed to: