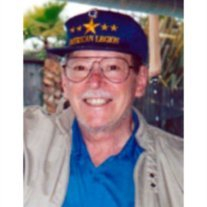 He served in the Air Force, 1952-1955 as a mechanic for the F86D Sabre Jets. He worked for Biglow Liptak & other companies in the refractory business that took him around the world until he retired in 1996.

He was preceded in death by his wife of 54 years, Shirley Ann Gardner, in July of 2010. He is survived by his children, Elizabeth Stange (Don); Patty Stewart (Dale); James Gardner Jr.; John Gardner (Jessica) and Jeffrey Gardner (Joanne); Grandson, Zakk, and Granddaughters, Eva, Anna, Halle, Abbie; his brother Glenn Gardner and many nieces and nephews. James was cremated on December 7, 2012.

Donations may be made in his name to your local American Legion organization or the Alzheimer’s Association, Orange County Chapter, 17771 Cowan, Ste. 200, Irvine CA 92614, www.alz.org/oc.