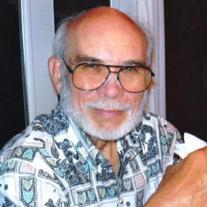 Jim was born in Portland, Oregon, March 23, 1931, and moved to Idaho when he was twelve. As a teenager he worked as a cowboy on a nearby ranch. He and his horse Pal drove the cattle up to the rangeland high in the mountains to get fresh grass and water. He made camp by a stream, caught and cooked a fish for dinner and played favorite Western melodies like “Blue Shadows on the Trail” on his harmonica.

After serving in the Army during the Korean War, he majored in Business Administration at the University of Idaho.

He was hired as an accountant trainee with U.S. Army Audit Agency in Pasadena, California. He advanced through the ranks and became a founding member of the Defense Contract Audit Agency, Los Angeles Region. During his 32 years of service, he received numerous awards for his outstanding contributions.

As proud as he was of his work-related auditing awards, his three hole-in-one credits were big favorites. His golf goal was to play every major golf course. He didn’t make that goal but seeing his favorites play at The Masters’ Practice Round in Augusta GA, made up for it.

During the aftermath of the Laguna Beach fire in 1993, Jim volunteered to help a church member record, interview fire victims, and disburse donations that poured into St. Paul’s Lutheran church. Over 400 homes were destroyed. Many of the victims of the fire were artists who were unable to earn a living, since all their equipment was gone. Jim worked five days a week for almost a year to ensure the money was properly distributed.

Cooking was a pleasure for Jim. He joined a Gourmet Club the day we moved into our home in Mission Viejo. Nothing was too much trouble. Even two pages of ingredients didn’t faze him. He once made gravy for 200 at a church dinner. The family loved his sheepherder’s bread.

If cooking was a pleasure then working with his flowers in the backyard was a passion. He could grow anything. For years, he couldn’t bear to throw out the poinsettias left from the holidays, so he planted them and they grew and grew. It was Jim and the beanstalk.

He was elected president and treasurer (twice) of the Riviera @ Bear Brand HOA in Laguna Niguel CA where he used his leadership and accounting skills to keep the Association financially afloat during the downturn in the economy. Input from homeowners was important to him and many meetings were held around the dining table, his personal office space. He served his community until his death.

After raising five boys, three adopted, two biological, and acquiring three stepsons for a total of eight boys, he was pleased to join his California granddaughter at her numerous tea parties. Together they cooked, planted flowers, laid stepping-stones, built patios, and painted her playhouse.

Jim was a great husband, father and grandfather. His motto throughout his adult lifetime of serious health issues was, “I’ll play the hand I’m dealt as best I can.” And he did. He died January 17, 2012 of cardiac arrest in Mission Hospital, Mission Viejo, California.