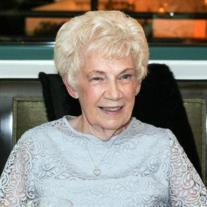 Hildred “Sis” Heckler was born in Rock Falls, IL on March 25, 1923, to the late Fred and Grace Wallace. She moved with her family to Alhambra, CA in 1967 and lived there until 1991, and then moved to San Clemente, CA. She was the beloved wife of the late Donald Fae Heckler for 33 years. She was also predeceased by her dear sister, Virginia Reiley, and by her beloved granddaughter Kimberli McBride. She will be sadly missed by her dear sister and faithful “Sunday afternoon drive companion” Audrey Gutches of Woodland Hills, CA; her beloved daughter Vicki McBride of San Clemente, CA; her loving son Gregg, daughter-in-law Andrea and granddaughter Ellie, of Aliso Viejo, CA; and her loving son Rick, daughter-in-law Noreen and grandchildren Gabrielle and Evan, of San Juan Capistrano, CA. She will also be sadly missed and lovingly remembered by her stepchildren, Jerry Heckler (Sterling, IL), his wife, Linda, and his children Chris and Julie; Sally Dolin (Rock Island, IL) and her children Mary, Peggy and Doug; and Bruce Heckler (Carlsbad, CA), his wife Jina and their son Sean; as well as many great-grandchildren, nieces, nephews and friends. Services will be held at O’Connor Mortuary on Friday, February 13, 2015. A visitation hour will be held at 12 noon, followed by a funeral service at 1PM. Immediately following the service will be a reception at the home of Rick and Noreen Heckler. All are welcome. Burial will take place at Rose Hills Cemetery, Whittier, CA, on Saturday, February 14, 2015.

Our beloved “Mama Heck”, as she was known to many, began her working life during World War II, when she went to work in a factory in Rockford, IL, to help support her family and the war effort. She held several other jobs over the years, but her most important role was that of caregiver. Whether as a mom, raising her children; a faithful wife swinging a hammer alongside “Papa Heck” to support his many construction projects; a trusted friend and neighbor; a dear sister; a beloved aunt; or as a doting Grandma rocking the babies to sleep, teaching the grandkids all about her friends from back in the day (the Apple Sisters – Seedy and Corey, or the Corn Brothers – Shuck and Husky..), and teaching Kimberli how to say the alphabet backwards (one of her best party tricks!), Sis’ world revolved around her family and friends and she will be sadly missed by all. Sis brought joy and laughter into this world and always brought much beauty to everything she touched. We know she is once again dancing in Heaven, and that if she could send us a message it would be “Oh Kid, I love it here! Everyone is wearing all white!!”

Services will be held at O’Connor Mortuary on Friday, February 13, 2015:
25301 Alicia Parkway, Laguna Hills, CA
A visitation hour will be held at 12 noon, followed by a funeral service at 1PM.

Immediately following the service will be a reception at the home of Rick and Noreen Heckler. All are welcome.