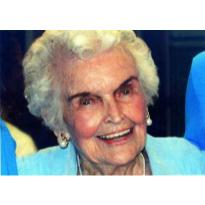 Helen Lyon passed away peacefully at her home in Freedom Village, Lake Forest, CA on Oct 2nd, 2009 at the advanced age of 101. She was grateful for the full life she had and was completely ready to join her family and friends in Heaven. Helen was born in Emporia, Kansas on February, 19, 1908 and lived in Montrose, Colo for most of her early life. She attended Kansas State Teacher College, New England Conservatory of Music in Boston, and received her degree from University of Southern California before settling in Los Angeles to teach school. She joined the Los Angeles Unified School District and rose from music teacher to Elementary Music Superviser for over 70 schools and 1500 teachers. The 1950’s and 1960’s were blessed with overwhelming support for the music program in public schools and Helen was in the forefront of music education in LA Unified School District.

Helen had a very busy life. She was a divorced single mother and somehow managed to raise her daughter, take care of elderly relatives, and still succeed in her career in the LA Unified School District. Helen retired in 1970 and with typical dedication, threw herself into volunteer work in West Los Angeles. Her activities included the Westside Philharmonic Committee, Westwood Hills Women’s Club, Westwood Methodist Church Music Committee, Republican Women’s Club, and Daughters of the American Revolution. Her daughter was married and the relatives had passed on. FREE AT LAST! Helen traveled extensively in the 70’s and 80’s, giving informative lectures and slide shows to various groups of her adventures through the world. Her exciting adventures took her to Hong Kong, Bali, Australia, and most of Europe including a Mediterranean Cruise, China, the Caribbean and Brazil. She was visiting Afghanistan, just before the Soviet Invasion, and then saw Pakistan, Nepal, and India.

At the age of 80, in 1988, she moved to Leisure World in Laguna Woods and remained active in volunteer work. She was one of the first female members of the Laguna Woods Kiwanis Club, where she chaired the Kiwanas Scholarship Program. She was active in the Laguna Woods Historical Society. She was a passionate supporter of the Saddleback Memorial Hospital, where she was instrumental in raising more than $16 million for the Meiklejohn Critical Care Pavilion. Helen was named Saddleback Hospital’s Philanthropist of the Year in 2006 and Community Leader of the Year in 2000, fitting tributes to a woman who has contributed much to her community. Helen was truly treated as royalty when she received care at Saddleback Hospital in her later years! She also received Leisure Worlder of the Month in July 1994 and the Lifetime Achievement Award from the Women’s Classified Service Club. Helen moved to Freedom Village, Lake Forest, in 2005 and continued a full social life.

Helen received many awards during her career and retirement. But perhaps the best award is the love and appreciation of her family for her support over the years: from financial support for mortgages and college education, baby sitting, travel to the wild lands of New Mexico to assist with birthing of her grandchildren, and enduring multiple smelly pets and a cigar smoking son-in-law.

Private family funeral services will be held on Oct 16, 2009 at Forest Lawn in Glendale. In 2008 Helen’s family produced two extravaganza birthday parties for her 100th birthday in the Laguna Woods area, complete with live entertainment, a slide show, and multiple tributes to Helen’s full life. She felt those parties with her close friends and family was her memorial service. In lieu of flowers, donations may be made to the Helen Lyon Memorial Fund, Manhattan Beach Community Church, Manhattan Beach, CA 90266, which will be used to enhance music for children’s choirs.

God Bless you, Helen, from your family and friends. You were a truly amazing woman. Your generosity and contribution to family and community will live forever.