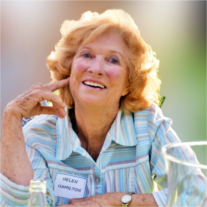 Helen was born in the Highland Park area of Los Angeles, and raised in the West Adams District next to Culver City where she attended Marvin Ave. Grade School and graduated from Hamilton High School, class of Summer 1944. Her mother was Erma Bloomquist Matthews, father George C. Matthews, with four siblings – two sisters, Donelle and Annamae, and two brothers, George and Robert.

She met her future husband, William R. (Bill) Hamilton, at age 15 in Newport Beach during Easter vacation in 1941. They dated until their marriage at the U.S. Navy base in Norfolk, VA on March 31, 1945. After WWII ended, her husband was transferred to the Naval Reserve as a Lt. (JG) officer and they started their family of 3 sons, William R. Hamilton Jr., Larry A. Hamilton and Daniel L. Hamilton in that order. They first lived in Venice, CA, then Covina, CA, Western Springs (Chicago) Illinois, (1964 – 1972), then back to California in Newport Beach and finally Capistrano Beach and Big Bear Lake.

During Bill’s “semi-retirement years” in California, they built The Cannery Restaurant and Malarky’s Irish Pub in Newport Beach and operated both – Cannery 1973-1999 and Malarky’s, 1977-2010, until sold to new owners and are still popular today.

Helen was devoted to her family, but had a heart big enough to gather and keep a vast circle of friends and relatives locally and in the USA, Scotland, England, Sweden and Australia. Her charities mostly dealt with children in need, Children Home Society, Boys Home and her favorite, Olive Crest, in Orange County.

Genealogy was her favorite avocation. For over 40 years of research and with the help from the wonderful Mormon Library in Salt Lake City, she compiled family history ledgers for herself and many others.

Helen was a beautiful person in so many ways. She was so loved by so many people of all ages for her personality, humor, wisdom, caring and concern for almost everyone she met. The reaction to her passing has been amazing.

Memorial services will be held Dec. 3 at Mariners Church in Irvine, CA with a reception to follow. In lieu of flowers please consider a donation to Olive Crest of Orange County, California.