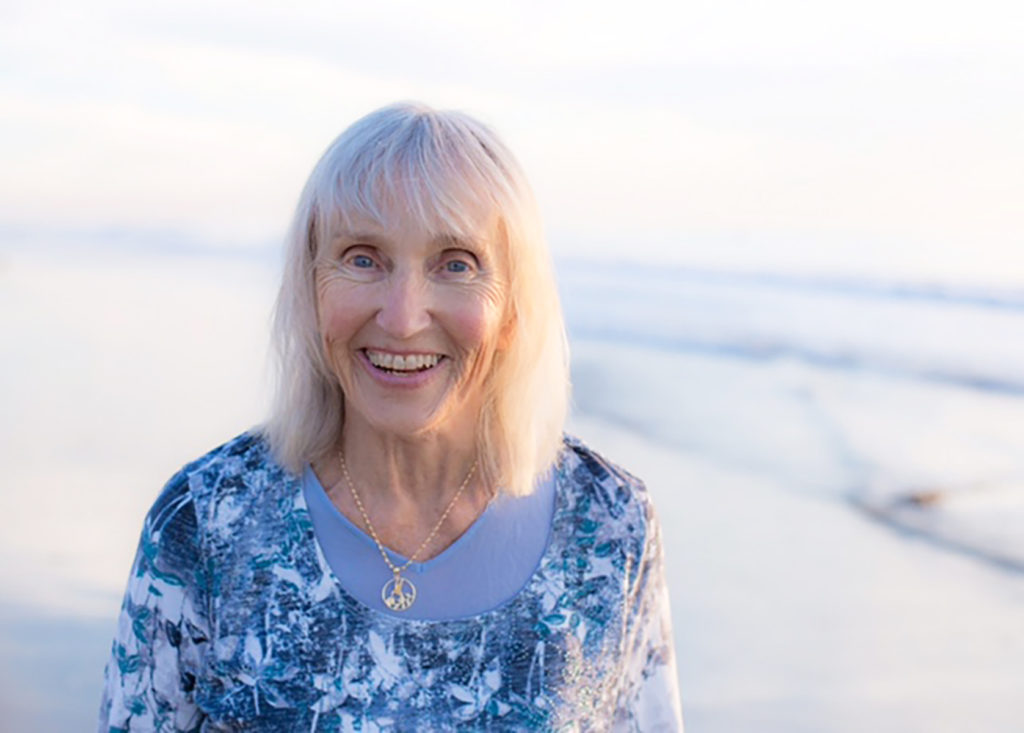 Helen Kathryn McKuskie Olson was born on May 26, 1936 in Nashua, New Hampshire and passed away peacefully at home in San Clemente on July 1, 2021  surrounded by loving family and caregivers after a 13-year battle with Alzheimer’s disease.

Helen was a second generation Polish-American and daughter of working-class parents. Her family valued education and encouraged Helen’s academic pursuits. She graduated from the University of Vermont in 1957 with a Bachelor of Science in Chemistry and completed her Master of Science degree one year later.

Nearing completion of her master’s degree in 1958, Helen began to search for full time jobs in the private sector. While Helen was on a sparsely filled flight, a young aspiring law student Gordon Olson noticed an empty seat next to Helen and asked, “Is this seat taken?” Helen invited Gordon to sit and thus began the journey of their life together. After a whirlwind Lake Champlain summer romance, Gordon proposed to Helen and they moved to Arlington, Virginia where Helen accepted one of her job offers and Gordon worked in Washington D.C. and attended law school at night.  Nine months later, on May 30, 1959, Helen and Gordon were married. In October of 1965, Helen and Gordon moved their growing family to Southern California, settling in Fullerton.

Helen loved learning with her five children, leading them fossil hunting in the Los Coyote Hills, tide pooling in Dana Point, star gazing in the mountains and rock collecting in the desert. She enrolled her children in science and art classes. Catechism, National Charity League, youth sports and music lessons kept Helen busy as activity coordinator and chauffeur. She was also active in Tri Delta, AAUW and PTA.

In 1975, with all the children now in school, Helen began graduate classes in Chemistry and Biochemistry at Cal State Fullerton and later transferred to UCLA where, in 1979, she earned her PhD in Molecular Biology and was honored as Graduate Woman of the Year. Helen continued at UCLA as an Adjunct Professor of Chemistry, dividing her time between teaching and research. She published numerous scientific articles, including several in the Journal of Biological Chemistry. In 1988, Helen left academia for industry and took a position as a Senior Scientist at Beckman Instruments where she continued working until retiring in 1995.

Helen’s time after retirement was highlighted by family beach weekends, travels with Gordon, family reunions in Mexico, Hawaii and the Alisal Guest Ranch in Santa Ynez and frequent visits to see grandchildren’s activities in San Diego, Newport Beach and the Central Coast.  Helen continued to stay active, forming a consulting group, managing residential real estate and joining a women’s investment club. Helen’s interest in investments led to her new mission of assisting in the financial education of women. She co-chaired a major symposium for women known as “Financial Strategies for Women” and founded a non-profit organization, Women Investing in Security and Education (WISE), to provide opportunities for the financial education of women and girls. WISE continues to educate thousands of women every year.

Helen was both a dedicated scientist and a devout Catholic. When her Alzheimer’s disease emerged in 2009, she responded with both intellect and faith. Despite her declining health, Helen still loved to laugh, sing and dance. Helen was able to remain at home until the very end because of Gordon’s support and dedication and the loving and committed care managed by her daughter Stephanie and provided by her amazing caregivers.